Our education programmes are supported by a range of exiting exhibits and live displays. 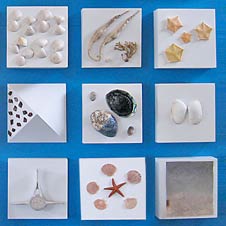 Part of our Science in the Sea programme, the treasure wall promotes exploration and enquiry. it encourages you to use your observations to ask questions, like a scientist:

Beside the display a touch screen gives further information, films, sound bites and images about what is featured on the wall. 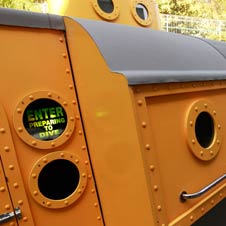 The submersible was developed for our deep sea exhibit.  It is named the DSV Batham in memory of Betty Batham, the first Director of the Portobello Marine Laboratory and one of the first researchers to explore the depths of the Otago coastline.  She did not use a submersible but used dredges to bring up creatures from the sea floor and she did learn to dive in her fifties!

The submersible takes passengers on a 15 minute virtual dive to the deep sea canyons to introduce some of the amazing animals that live in the deep sea. 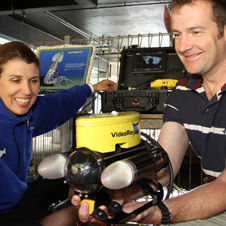 The Marine Studies Centre has a variety of equipment to help researchers peek under the waves.

Waterproof cameras such as the Go-Pro are great for making short underwater films and doing time-lapse photography - for example to see what happens on the shore when the tide comes in.

Polecams are waterproof cameras on extending poles, useful for holding off wharves and boats to view the life under the surface.  They are often used for studying whales in the Auckland Islands.

The Remote Operated Vehicles are self-propelling and can go where directed whilst sending images back to the surface. 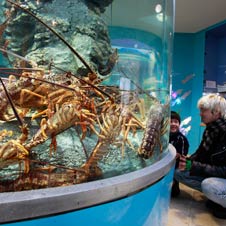 We hold a wide range of marine animals and plants from Southern New Zealand at the Marine Studies Centre.

These support and are used in our programmes such as: 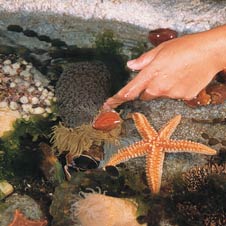 Our touch tanks enable close up study of the animals and plants that are found in the intertidal zone and shallow waters of the Otago coast.

You may spot a dividing seastar growing new arms, feel the sticky tentacles of an anemone, find a triplefin hiding under a rock, discover a hermit crab in a snail shell, or watch what happens when you stroke a velvety duck's bill limpet.

Constantly changing, our live displays and touch tanks delight our visitors of all ages.