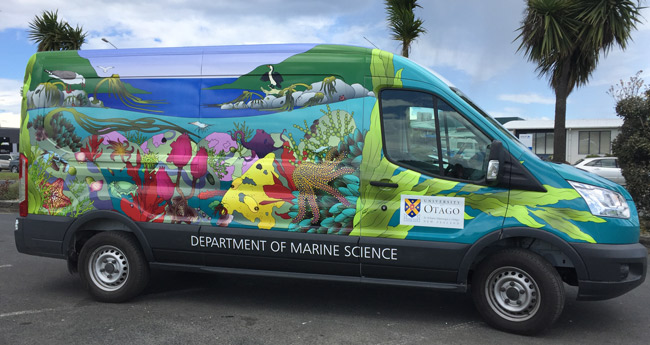 The University of Otago has just unveiled its new Aquavan – a purpose built vehicle for transporting marine animal and plant collections for teaching and research and out into the community.

The van, equipped with chilled recirculating seawater tanks, will reduce stress on the animals being transported, and allow researchers to collect specimens from sites further afield and also from multiple sites over a period of time.

“In the past we have had to transport specimens back from the field in buckets. It put stress on the animals and meant they were not always in optimum condition for research. The Aquavan will solve that.”

Ms Carson says the van will also expand the areas researchers are able to bring samples back from, and allow them to stay away longer.

“It just expands our opportunities for field work. We have research stations in Stewart Island and Fiordland and researchers wanting to examine environments in the Catlins and Kaikoura. With the Aquavan they will be able to.” 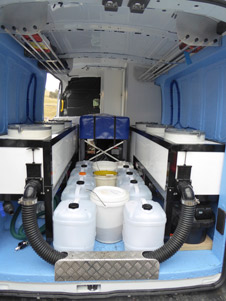 The interior of the Aquavan boasts chilled, recirculating seawater tanks.

While its primary purpose is for research and teaching, for part of each year the Aquavan will be made available to the University’s New Zealand Marine Studies Centre for community outreach initiatives.

It will allow public educators to visit schools further afield, including in Central Otago, Southland and the West Coast as well as schools in Dunedin.

Centre Curator Adelle O’Neill says the van is an incredible resource for schools.

Along with the van, the team has built two recirculating touch tanks – so marine plants and animals can be unloaded from the van and shown to pupils.

“It’s amazing how many children have never been to the rocky shore, even in here in Dunedin. Although school programmes have continued at the Portobello site, the Aquavan provides an opportunity for schools that may not be able to get to Portobello.”

Construction of the Aquavan has been a challenging project – nothing like this exists in New Zealand, and staff had to look overseas for examples.

“We looked at a van that Birch Aquarium at Scripps Institution of Oceanography in San Diego, California, had designed,” Ms Carson says. “They were really helpful and gave us some good ideas and direction.”

Funding was provided by the University’s Division of Sciences and the van itself was converted by Dunedin Motor Homes.

“They were great. It was an interesting challenge for them.”

The colourful exterior of the Aquavan was designed by Corlis Schneider, who was an intern at the Marine Studies Centre and created illustrations for some of their educational publications. Making the artwork fit the Aquavan was the job of Speedy Signs.

Getting it on the road

Although the costs for the van and fit out have been provided by the University of Otago, funding is needed to take it on the road and out into the community.

The van has been selected as one of the seven projects to be supported by this year’s University of Otago Annual Appeal.

The money raised will go towards the costs of taking the Aquavan to communities and schools around southern New Zealand and delivering marine education programmes.

Go to the annual appeal site to make a donation: https://www.alumni.otago.ac.nz/annual-appeal-donate

The van will be on display in the Dunedin Farmer's Market on Saturday 15 April (Easter Saturday) when it will be used to promote the Wild Dunedin Festival and educational visits to the New Zealand Marine Studies Centre.