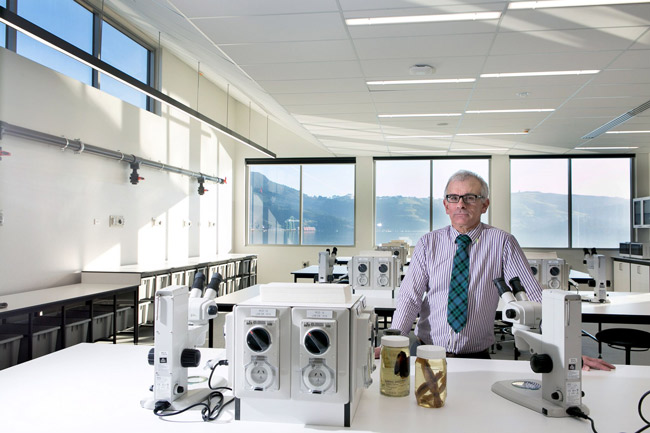 Lab with a view … Dr Doug Mackie in the University’s new teaching laboratory at Portobello, with its views of Otago Harbour. Photos: Sharron Bennett.

Otago’s new $5 million teaching laboratory – with outstanding facilities – is expected to host its first lecture at Portobello next week.

Students from the Department of Marine Science will have three- or four-hour labs in the 42-seat facility – which also includes a study room – and other departments are more than welcome as well, University of Otago Portobello Laboratory Manager Dr Doug Mackie says.

The new teaching lab with the fish tank (on right wall).

The site has never been home to a purpose-built, dedicated, university-level teaching laboratory before, and having a six-metre display tank in the lab means “instead of just talking about a fish, you can point to it”.

Those touch tanks are in a specially constructed indoor area with concrete floors and good drainage, instead of being in the open air and covered only by a clear plastic roof.

The lab – on the first floor of the new building – has large picture windows looking out on Otago Harbour as well.

A new seawater system pumps 60,000 litres of seawater through the complex every hour – up from 35,000 litres – eliminating the enormous amount of attention staff had to pay to water flows and oxygen levels to keep sea creatures alive, Dr Mackie says.

At full capacity, the system can pump 1.4 million litres of seawater a day, instead of 900,000. Previously, the seawater supply was often insufficient for staff and students’ experiments.

The ground floor of the new building houses temperature- and light-controlled rooms for research, a dive changing room, showers, toilets and a covered outside area known as the under-croft.

People can do wet, muddy work there but still be protected from the elements, while also drying dive gear and storing dive tanks, Mr Mackie says.

The narrow walkway to the jetty has been replaced with a wider walkway, which includes a safety rail and lighting.

Two large holding ponds underneath the pre-existing three-storey research laboratory building which is on the site have also been refurbished.

They were built in 1903 for a fish hatchery that was on the site until the University renovated the hatchery to create a Marine Biological Station in the early 1950s.

The new teaching laboratory, at front right, with its waterfront under-croft.

The building has just been handed over to the Department of Marine Science, and the first teaching class is scheduled for next Thursday, after setting up of the laboratories has been completed.

University of Otago Campus Development Division Project Manager Christian German says working on a project that helps staff showcase and enhance their enormous ability and creative approach to educating both students and pupils has been extremely rewarding.

An old, much smaller office and public aquarium building had to be demolished because it was an earthquake risk. It met less than 15 per cent of the new-building standard for earthquake strength and could no longer cater for modern teaching standards, so had been vacant for four years

The Head of the Department of Marine Science, Professor Steve Dawson, says it seems the original builder made the concrete with beach sand because it was so handy, but the salt eventually rusted away the steel reinforcing.

Once the building was demolished, the contractors discovered it had been built on a mixture of poor ground conditions and old watercourses, so extra work had to be done to create foundations that meet modern standards.

Removing the 1960s two-storey public aquarium and office building involved dismantling it piece by piece, loading those pieces into a skip, and repeatedly hauling the skip by crane up the cliff behind the building.

It was the smallest of the main buildings on the site; the neighbouring three-storey 1987 building housing New Zealand’s premier marine research laboratory is still being used, and so is the New Zealand Marine Studies Centre, which is further up the hill and was built in 1996.