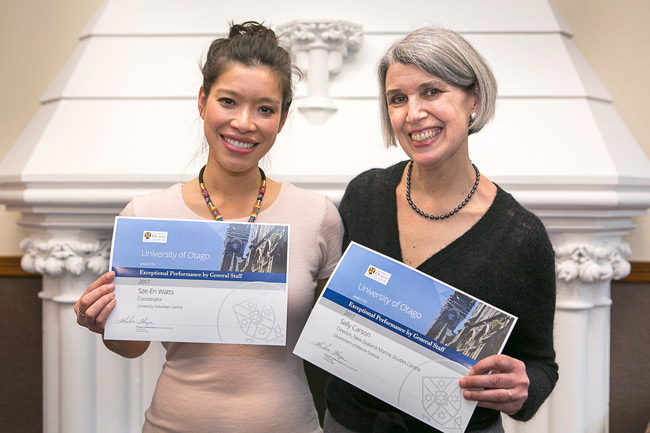 Two women who work tirelessly to enhance the University and its contributions to the wider community have won this year’s University of Otago Award for Exceptional Performance by General Staff.

While Mrs Carson has worked for the University for 26 years, and Ms Watts for just three years, the contributions of both are tremendous. 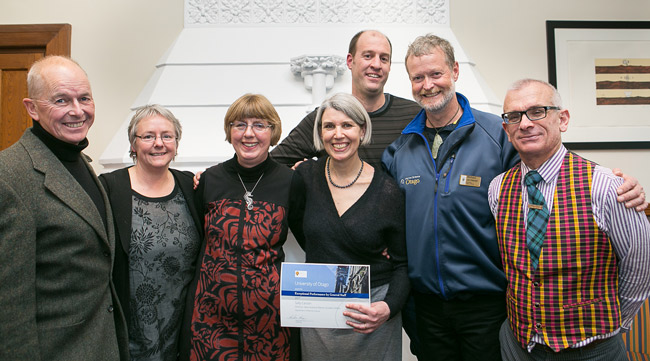 The Director of the University's New Zealand Marine Studies Centre Sally Carson (centre) with her colleagues at the General Staff Award ceremony today.

Sally Carson leads the University’s New Zealand Marine Studies Centre (NZMSC) at Portobello – and beyond the well-recognised schools and community education programmes offered by the Centre, she is behind many new outreach initiatives including the creation of the NZ Shore Guides; the Marine Metre Squared (Mm2) project, a nation-wide citizen science initiative that encourages long-term monitoring of the New Zealand seashore; and most recently the new Marine Science “Aquavan” - a facility which can be used by researchers to transport marine specimens and also to bring the marine world to schools and community.

The Manager of the NZMSC Tessa Mills and Educator Richard de Hamel jointly nominated Mrs Carson for the award. They say she is “full of ideas, energy and enthusiasm, and never misses an opportunity to promote marine science.”

“The outreach work Sally has initiated over the years - programmes for schools, projects for the general public, and resources and publications such as our Seashore Guides - is immense, and well-received, and it all reflects back on the University of Otago's name and reputation,” Mrs Mills says. “Almost 15,000 people participated in programmes delivered through the NZMSC last year.”

"This award highlights the exceptional work of all the staff at the NZMSC and the support we receive from the Portobello Marine Lab and the Marine Science Department."

Alongside her outreach work, they say Mrs Carson’s leadership during the last five years, since the Portobello Aquarium closed to the public has been “exceptional”.

“During these uncertain times she has worked hard to find new sources of funding, helped her team to change their perspective, focus on what we could continue to do, and adapt to a new future.”

Mrs Carson joined the University in 1991, coming from a similar role with the Western Canadian Universities at the Bamfield Marine Station on Vancouver Island.

She came on a one-year contract to help the, then new, Marine Science Department out of a problem, explains Mr de Hamel.

“Schools were wanting to learn about the marine environment and this was taking up research staff time. Sally, with her experience of marine education in Canada was ideally suited.

“She proved so good at it that the demand from schools rapidly increased and her contract was renewed, until it was made permanent, and under Sally’s direction the new New Zealand Marine Studies Centre was set up.”

Two-and-a-half decades later, Mrs Carson says she was very surprised to be recognised with the general staff award.

“Partly because my role is not a traditional University role, so it is not only recognition for the work my team and I do but also highlights the value that the University places on engaging with the wider community,” she says. “This award highlights the exceptional work of all the staff at the NZMSC and the support we receive from the Portobello Marine Lab and the Marine Science Department.” 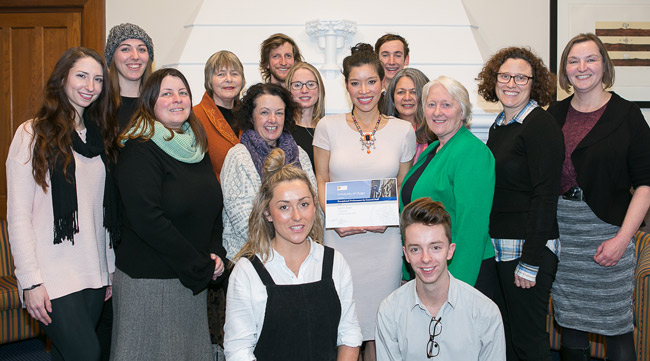 The coordinator of the University Volunteer Centre Sze-En Watts (centre) with her colleagues at the General Staff Award ceremony today.

Sze-En Watts was hired in 2013 to coordinate the newly created University Volunteer Centre (UVC) – and according to her nominators (the Director of Student Services Karyn Thomson and the Manager of the Career Development Centre Jackie Dean), she has performed well beyond expectations.

“In the relatively short time since then she has transformed the landscape of volunteering across the University, and developed and built the UVC into an amazing centre which benefits both the University and the wider community,” Mrs Dean says.

Her achievements include coordinating a community-wide project to send 600 boxes of crafts and learning materials to Vanuatu following Cyclone Pam; driving the country’s first Student Volunteer Week in 2015; running the Dunedin Sleep Out; coordinating the University of Otago Student Leadership Award; and joining the Otago delegation to the Global Citizenship Workshop for the Matariki Network of Universities in Uppsala, Sweden.

"I see the award as a bit of a tribute to the effort of all my many and varied teams across the past three years in building the student volunteer movement at the University of Otago."

“Whether Sze-En is involved in the frenzy of O-week volunteering which in 2017 involved seven colleges, 37 community organisations, 57 projects, 768 students and 2,304 volunteering hours, or developing a longer term project such as the Aspire after-school programme for Year 8s, Sze-En’s enthusiasm, motivation, commitment and strong leadership to the students of the University of Otago, is clear to see,” Mrs Dean says.

Ms Watts says she was moved to tears when she heard she had won the award.

“I see the award as a bit of a tribute to the effort of all my many and varied teams across the past three years in building the student volunteer movement at the University of Otago.”

Both Ms Watts and Mrs Carson agree the general staff award is vitally important – in acknowledging the excellent work done by so many across the University.

“The general staff community includes a lot of staff who are like uncut diamonds,” Ms Watts says. “They add so much value to pretty much everything that happens at the University. Opportunities to celebrate and acknowledge the impact of non-academic staff help give them a little polish every now and then!”’

The award, which was instituted in 2004, aims to recognise and reward members of the general staff who have made an outstanding contribution to the University of Otago.

Past winners have been chosen from across campuses and departments. The award winners receive a grant for a project or professional development initiative that benefits the University as well as the individual.