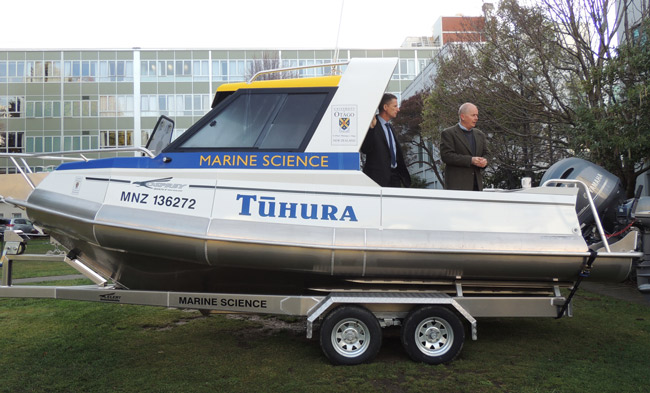 The Department of Marine Science has launched its new research vessel, Tūhura.

The name Tūhura means “to investigate or discover” – very appropriate for the 6.5 metre Osprey which will be used to support field collections, water sampling and diving.

Tūhura is a replacement for the Tawera, which sank at its berth in 2016.

At the launch last Tuesday the Head of the Department of Marine Science Steve Dawson was quick to point out that the pontoon-style of the new boat makes it “unsinkable”.

"It should be faster and much more capable, much safer, a lot more comfortable and no less fuel efficient than its predecessor."

“You could fill it up with water completely, and it won’t sink.”

Marine Science Chief Skipper Steve Little said the Department had wanted a versatile boat that could be towed.

“The mobility of being able to go anywhere with it is important,” he said “We foresee using it in the inland waterways such as Lake Ohau, or we could actually tow it over to Fiordland.”

Professor Dawson said the boat had been fitted out to maximise its versatility, with lifting points to allow it to be lifted onto the University’s main research vessel Polaris, areas to bolt on equipment, a laptop shelf, inverters to run 240V equipment and excellent access for divers.

“It should be faster and much more capable, much safer, a lot more comfortable and no less fuel efficient than its predecessor,” he said. 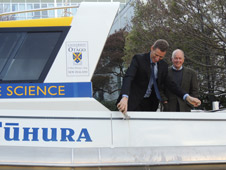 Tūhura was officially christened with a single serve bottle of sparkling wine by the University’s Pro-Vice-Chancellor (Sciences) Professor Richard Barker who joked that this was an upgrade from the bucket of water he was given to christen the Department’s previous new vehicle, the Aquavan.

While it will be based primarily at the Portobello Marine Laboratory, it will be available for use by other departments, and Professor Dawson says they have already had interest from Geology and Surveying.

Professor Dawson encouraged those at the launch to think about how they could use Tūhura in their research.