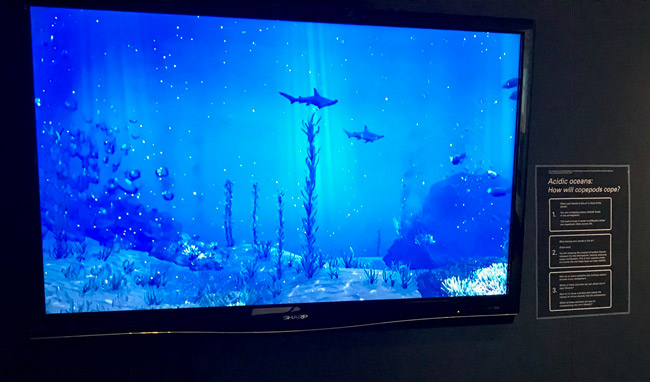 Artist Martin Kean paired with PhD candidate Morgan Meyers to create an animation based on her work in the new Art + Oceans exhibition, currently on at the Museum's HD Skinner Annex.

Two of the Otago scientists involved in the new Art + Oceans exhibition currently on display at Otago Museum’s HD Skinner Annex rolled up their sleeves and took a more hands-on role in the creative process.

The exhibition is the sixth in the Art + “Science” project series held annually in Dunedin, in which artists meet with scientists, learn more about their research, and then create art inspired by the work.

"... if a visitor to the artwork feels drawn to engage with the screen, the moment they start waving their arms around, the waters darken and the copepods and phytoplankton become affected. If they do nothing, the water clears."

Otago PhD candidate Morgan Meyers and Chemistry Senior Lecturer Dr Christina McGraw were two of 20 scientists who took part in the project. They were paired with Martin Kean and Hope Duncan respectively – and the partnerships became collaborations.

Morgan is completing her PhD in the Departments of Botany and Marine Science on the topic Trophic processes and distribution patterns of New Zealand zooplankton through the lens of climate change.

She and Mr Kean (a Senior Lecturer in the Otago Polytechnic School of Design) problem-solved an interactive artwork based on copepods – a group of small crustaceans found in the sea and nearly every freshwater habitat.

“We were looking for an elegant solution that allowed for interaction and yet didn't look or work like a screen-based game, so we struck on the concept of non-interaction as a way in which visitors could discover that they should be hands-off with the oceans, because constant and increasing human activity is predicted to be driving up acidity levels in the seas,” Mr Kean explains.

“So what happens is this: if a visitor to the artwork feels drawn to engage with the screen, the moment they start waving their arms around, the waters darken and the copepods and phytoplankton become affected. If they do nothing, the water clears.” 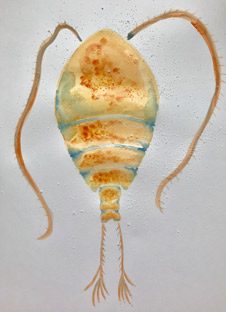 Morgan, who had recently taken a botanical illustration course at Dunedin’s Olveston Historic Home, then took this collaboration a step further, creating her own artwork – a water-colour painting of a copepod.

Ever the scientist, she wanted to incorporate some specific characteristics of the types of water relevant to her research.

“Water that is saltier, more carbonated, and more acidic than the water one typically uses with water colours,” she explains. “I was really curious about how these different solutions might interact with the pigments in the paints to produce various effects on paper.”

She says she was really excited to participate in this kind of interdisciplinary collaborative project, and can see herself drawing from this experience when communicating her research.

“The main reason I am attracted to the idea of artwork inspired by science is to communicate and expose that science to larger, more diverse audiences than the audiences that typically experience it (i.e. academics and researchers). Investing resources in science literacy and science communication is extremely important in today’s global society for countless reasons, and art is a universal tool that can help us improve in these areas.” 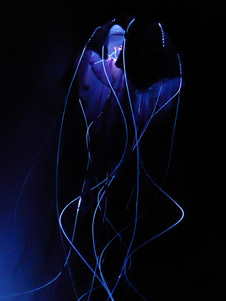 Working together she and Hope Duncan created a beautiful optical jellyfish for the exhibition.

“Hope visited my lab to see the optical fibre sensors in action, then she hand-dyed different yarns and fabrics for me to work with,” Dr McGraw says.

“My task was to grow different types of crystals on the wool fibres to mimic the look of the crystals we study in the lab. During this period, I also had the opportunity to visit her studio a few times to see the jellyfish taking shape.

“Near the end of the project, we spent several evenings in her studio, where we wove my optical fibres into her wool fibre sculpture. Our final step was work to with light and power to get the perfect amount of light travelling through each fibre.

“I have spent countless evenings in the lab doing the same thing, but this is the first time that effort resulted in a glowing, wool and steel jellyfish!”

"I have spent countless evenings in the lab doing the same thing, but this is the first time that effort resulted in a glowing, wool and steel jellyfish!”."

“At the show opening, it was clear that many people were more engaged with the art than they would have been with my carefully chosen words about the same subject,” she says.

Curated by Dr Jenny Rock (of Otago’s Centre for Science Communication) and Pam McKinlay (of the Dunedin School of Art) the exhibition opened on Monday and runs through to Sunday 5 August.

It involved 27 artists and scientists from across the University plus the Cawthron Institute, Landcare Research, NIWA, the Sustainable Seas National Science Challenge, Coastal Acidification: Rate, Impacts and Management, Biodiversity Research Centre, the University of British Columbia, and a four-year project funded by the Ministry of Business Innovation and Employment.

Dr Rock says it has been wonderful seeing some of the novel forms of collaborations that have taken place – and seeing scientists help with the artistic process has been particularly interesting.

“The traditional model of an artist being inspired by a scientist's work, and creating an interpretation which then engages the public is a “tried and true” model – and is a great form of science communication.

“What is just as important though is art informing science – and widening a scientist’s perspective. It was particularly exciting to see more mutual forms of collaboration like scientists co-creating artwork and, indeed, artists inspiring the future collaborative research of scientists!”

Art + Oceans 2018 is supported by the Sustainable Seas National Science Challenge, which provided funding for a component of the artworks to be made transportable in a travelling exhibition.