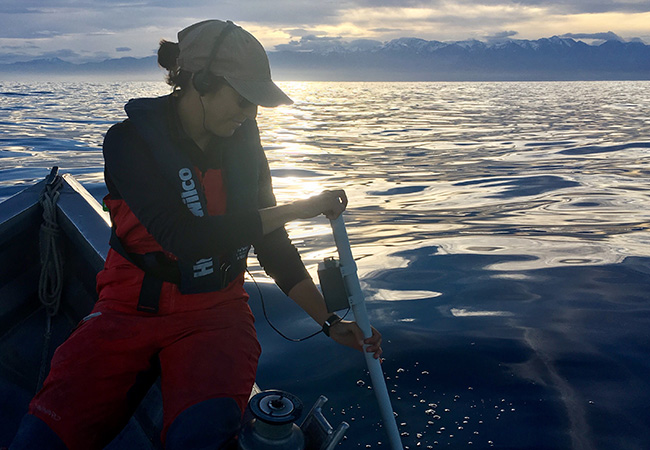 Otago scientists studying sperm whales off the coast of Kaikōura have discovered earthquakes affect their ability to find food for at least a year.

The University of Otago-led research is the first to examine the impact of a large earthquake on a population of marine mammals, and offers new insight into how top predators such as sperm whales react and adapt to a large-scale natural disturbance.

Changes in habitat use by a deep-diving predator in response to a coastal earthquake, has recently been published in Deep Sea Research Part I.

Earthquakes and aftershocks can affect sperm whales in several ways, the study explains.

The whales depend on sound for communication, detection of prey and navigation and are also highly sensitive to noise.

While earthquakes and other extreme natural events are rare occurrences, they can really shift the state of ecosystems by wiping out animals and plants, lead author and Marine Sciences Teaching Fellow Dr Marta Guerra says.

“Understanding how wild populations respond to earthquakes helps us figure out their level of resilience, and whether we need to adjust management of these populations while they are more vulnerable.”

The fatal 7.8 magnitude Kaikōura earthquake on 14 November 2016 produced strong ground shaking which triggered widespread underwater mudslides in the underwater canyon off the coastline.

This caused what’s known as ‘canyon flushing’, which in the case of the Kaikōura earthquake, involved high-energy currents flushing 850 tonnes of sediment from the underwater canyon into the ocean.

The Kaikōura canyon is an important year-round foraging ground for sperm whales, which have an important ecological role as top predators and are a key attraction for the local tourism industry – the main driver of the town’s economy.

Just why the canyon is important to sperm whales is “a piece of the puzzle we are still trying to nut out”, says Dr Guerra.

“But it's likely related to the immense productivity of the canyon's seabed, and a combination of how the currents interact with the steep topography of the submarine canyon.”

Scientists examined data collected on the behaviour of 54 sperm whales between January 2014 and January 2018 – a timeframe which allowed an opportunity to determine any significant changes in pre and post-earthquake whale foraging behaviour.

“We really didn't know what to expect, as there is so little known about how marine animals react to earthquakes,” Dr Guerra says. 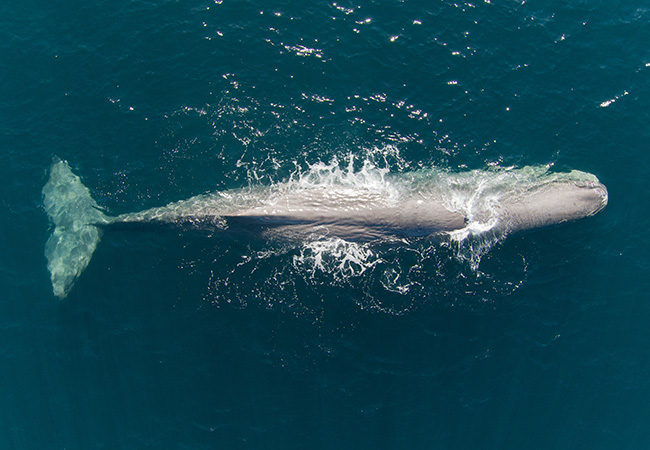 The researchers found clear changes in the whales’ behaviour in the year following the earthquake: most noticeably whales spent about 25 per cent more time at the surface - which potentially meant they needed to spend more effort searching for prey, either by diving deeper or for longer times

There are two main reasons the whales may have expanded their search effort, the study explains.

First, benthic invertebrate communities which lived in the upper canyon may have been removed by the canyon flushing event, resulting in sparser prey and reduced foraging abilities.

Second, sediment deposition and erosion may have required sperm whales to ‘re-familiarise’ with a modified habitat, increasing the effort to navigate and locate prey whose location may have changed.

“The flushing of almost 40,000 tonnes of biomass from the canyon's seabed probably meant that the animals that normally fed on the seabed had a short supply of food, possibly moving away,” Dr Guerra says.

“This would have indirectly affected the prey of sperm whales (deep-water fish and squid), becoming scarce and making it harder for the whales to find food.”

Scientists were particularly surprised by how clear the changes were, especially in terms of where the sperm whales were feeding.

“The head of the Kaikōura canyon, where we used to frequently find sperm whales foraging, was quiet as a desert,” Dr Guerra says.

Although earthquakes happen relatively frequently in areas where marine mammals live, this study was the first to document the impact on a population, thanks to a long-term monitoring programme which has been in place since 1990.

Globally, there have been punctual observations, such as a fin whale displaying an 'escape response' after an earthquake on the Gulf of California, or particularly low sightings of humpback whales coinciding with the months following an earthquake off Alaska, Dr Guerra says.

“Deep-sea systems are so out of sight that we rarely consider the consequences of them being disturbed, whether by natural or human impacts.

“I think our results emphasise how far-reaching the impacts to the sea bed can be, affecting even animals at the top of the food chain such as sperm whales.”

The study found the whales’ behavioural changes lasted about a year after the 2016 earthquake and returned to normal levels in the summer of 2017-18.

Dr Guerra believes this study also highlights the importance of long-term monitoring of marine wildlife and ecosystems, without which scientists wouldn't be able to detect changes that occur after marine mammals are exposed to disturbance.