Marine Science graduate on a journey to protect our underwater world 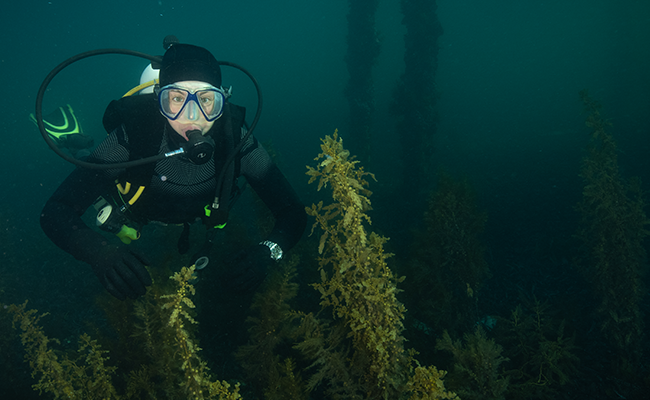 And along the way she’s covered a lot of the planet – from the Sub Antarctic Islands to the Great Barrier Reef, from Japan to Mexico, and Panama to New York.

Millie, who graduated in May with her MSc (Dist) in Marine Science, was named one of three international Our-World Underwater Scholarship Society (OUWSS) Scholars in 2020.

Sponsored by Rolex, the AU$30,000 scholarship was deferred due to delays caused by the pandemic and she is only now about to head off to New York to attend the UN World Ocean Day in the first week of June, and begin her scholarship year. Each year the scholarship is awarded to a young person from North America, Europe and Australasia.

“The scholarship was a dream opportunity and an ambitious goal of mine that I worked towards during my time at university. Making it through the application process to the interview round was very exciting and I am incredibly humbled and honoured to now be the scholarship recipient.”

The interview was held in Sydney, and she made it home just before the first lockdown in 2020.

Millie says the scholarship is a year-long programme which gives a young person interested in pursuing an underwater-related career the chance to be involved in a wide variety of underwater or other aquatic-related projects.

“That could range from underwater archaeology, videography, scientific expeditions, technical dive training or different research projects,” says Millie. “The scholar really gets the opportunity to tailor the experiences to their own interests.” 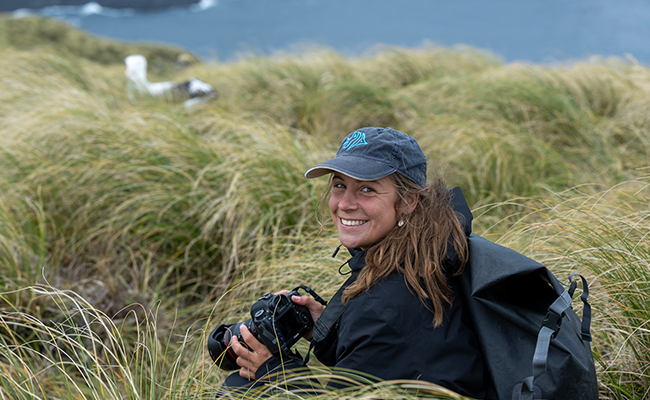 Millie intends to focus on developing her diving, photography and videography skills, and to join different research projects as opportunities arise. Outreach is a big part of the programme, and during the year she will keep a regular blog, post updates on social media and seek out opportunities for publishing articles. At the end of the year, she returns to the OUWSS symposium in New York to present a video on what she has experienced and achieved during the year.

The first step is the UN Oceans Day on 8 June and World Oceans Week hosted by the Explorers Club in New York, where she will be involved in activities ranging from policy workshops to outreach projects.

“I aim to use the scholarship to gain exposure to a range of career avenues while developing my diving skills. I look forward to learning more about future strategies for marine conservation and research, including innovative approaches to protection and restoration,” she says.

“It’s all still in the pipeline, but I’m really interested in temperate reef ecology and things like kelp forests, they really fascinate me as they are so important. And I have a big draw to wild remote places, managing anthropogenic impacts on them and working out how to further their protection. I’m really interested in marine conservation, protection and research as well.”

She says the year will help her decide whether she wants to continue down the route of academia or look more into science communication and other underwater-related careers.

Most recently, Millie has been working as a scientific diver for the Department of Conservation and an environmental consultancy on a range of different projects, including monitoring the spread of Undaria, an invasive seaweed, in Fiordland.

She took up diving in her second year at Otago, after she added Marine Science as an interest paper to her degree. 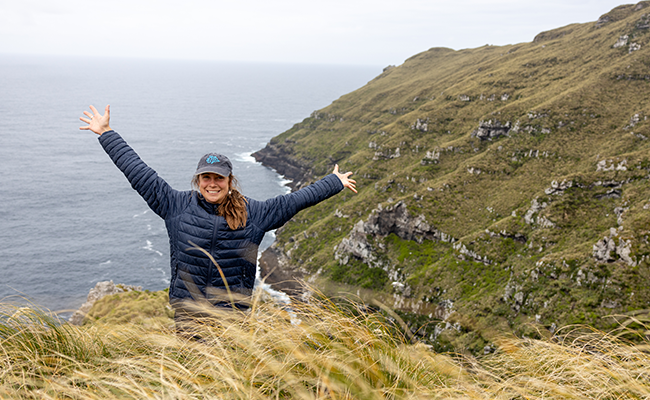 Ecstatic to be amongst thousands of birds at the Whitecapped Albatross colony on Auckland Island. Photo credit: Lana Young

“That’s when I decided I’d pursue it as my degree with Zoology, because I was fascinated at everything about living systems above and below the water. It’s especially interesting to couple research with scuba diving as you can really immerse yourself in the environment you’re studying. It’s an incredible tool for science.” She graduated with a BSc in Zoology, with a minor in Marine Science in 2019.

In 2018, Millie was chosen as a BLAKE Ambassador, to sail on board the research schooner Tara, from Panama to New York as part of an expedition led by the Tara Oceans Foundation. During the voyage, she worked with an international collaboration of scientists to conduct ocean biodiversity research.

“It was a huge privilege to be able to be part of the expedition. . . I think it was through that experience that I became very dedicated to pursuing marine research and conservation.”

In 2020, she also represented New Zealand through her selection as a delegate on the 32nd Ship for World Youth Programme, sailing aboard the Nippon Maru from Japan to Mexico.

For her master’s research, Millie completed her field work at the Lizard Island Research Station in the northern Great Barrier Reef. Her research examined the impact of microplastic exposure on predator-prey interactions of coral reef fish. Based on her academic merit and research potential, she was awarded a University of Otago Master’s Research Scholarship as well as the John Jillett Prize for the best thesis proposal.

“I had an absolutely incredible master’s supervisor, Dr Bridie Allan, who supported me immensely throughout my master’s and also encouraged me to apply for the scholarship.”

Millie also worked as a research assistant for Otago at the end of her master’s, which she says gave her the opportunity to see how research is formulated and put into action.

This past summer, she was supported by the University to join an expedition to the Sub Antarctic Islands, as the Heritage Expeditions True Young Explorer. During the expedition, she visited the Snares, Campbell, Bounty, Antipodean and Auckland Islands.

“That was another huge privilege, to be able to have the opportunity to see these islands and the incredibly unique and amazing animals that inhabit them.

“I think that was another experience that really inspired me to keep on this path of conservation and also research, to further our understanding of how these ecosystems work and how we’re affecting them.”

During her time at Otago, Millie says she coupled her undergraduate journey with a lot of volunteering opportunities, involving herself in conservation projects and research.

“I think having that experience as well pushed me through into master’s. Once I was in the postgraduate programme I was made aware of how many opportunities there were. And you meet so many dedicated individuals that it’s hard not to be inspired by the department.

“It's a really exciting area to be in and I think marine science is something that’s developing and growing bigger as people gain more understanding of the underwater world and become aware of the impact we have on it.”