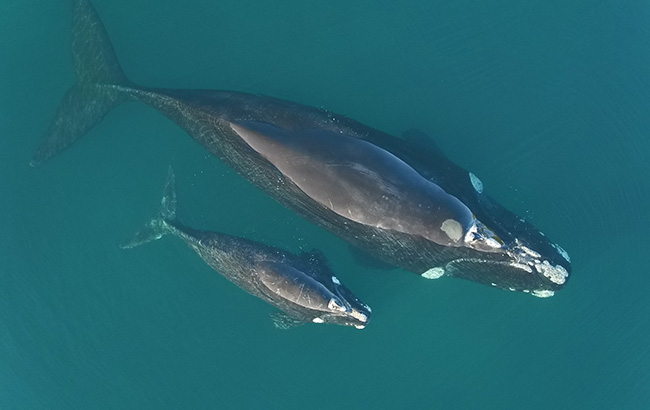 Mother whale with her calf.

New research by an international team of scientists, including researchers from the University of Otago, reveals that endangered North Atlantic right whales are in much poorer body condition than their counterparts in the southern hemisphere. The alarming results from this research are published this week as the feature article in the journal Marine Ecology Progress Series.

Since the end of large-scale commercial whaling in the last century, southern right whales have recovered strongly, now numbering 10,000–15,000 individuals. In contrast, the North Atlantic right whale, today found mostly off the east coast of North America, is teetering on the brink of extinction, with about 410 individuals remaining. Vessel strikes and entanglement in fishing gear continue to kill these whales. They also suffer a range of other stressors including sub-lethal entanglements in lobster pots, acoustic pollution, and changes in availability of their main prey, copepods. Now, individual North Atlantic right whales are visibly thin and unhealthy, which makes them less likely to have a calf and accelerates their current decline.

“Feeding mostly on dense shoals of tiny copepods, right whales build up their fat reserves in the summer, and migrate inshore in winter to breed. In the last stages of pregnancy, and for the first months of suckling, females don’t feed at all. So, how “fat” they are is crucial to their ability to support the pregnancy, and the fast-growing calf.” Dr Rayment, coleader of the New Zealand research team, said.

The study measured 523 whales, including 74 from New Zealand. It is the most comprehensive assessment of the body condition in any whale species, and involved 18 researchers from 12 institutes in five countries.

The analysis had good news and bad news. “The bad news is that North Atlantic right whales were clearly in the worst condition, notably thinner than any individuals in other right whale populations. Undoubtedly this has consequences for reproduction in this critically endangered population” said Professor Dawson, NZ coleader and pilot.

The good news is that the NZ whales were in excellent condition. “We always thought that right whales from the New Zealand population looked fat and healthy, but this study proves that point. On average the mums nursing their calves in New Zealand had a 25% higher body condition index than the mums in the North Atlantic. This probably reflects lower impacts from fishing and shipping in the Southern Ocean compared to the North Atlantic.” 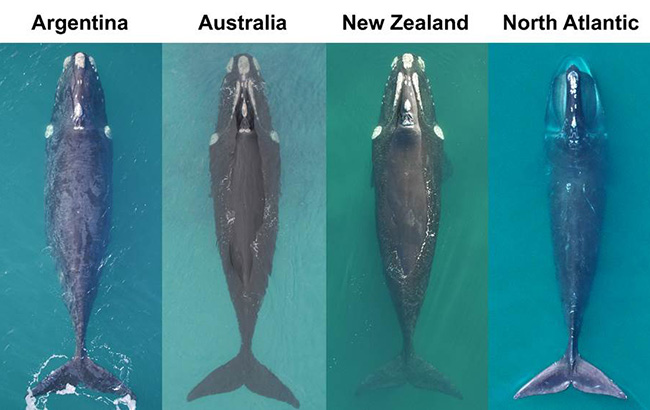 Study co-author Dr Marcela Uhart from the University of California, Davis, said “It is encouraging to see right whale scientists around the world joining efforts to inform conservation action. The plight of the North Atlantic right whale is a wake-up call for us all.”

“For us in NZ, the study supports our hopes of right whales once again becoming common in NZ waters.” Dr Rayment said