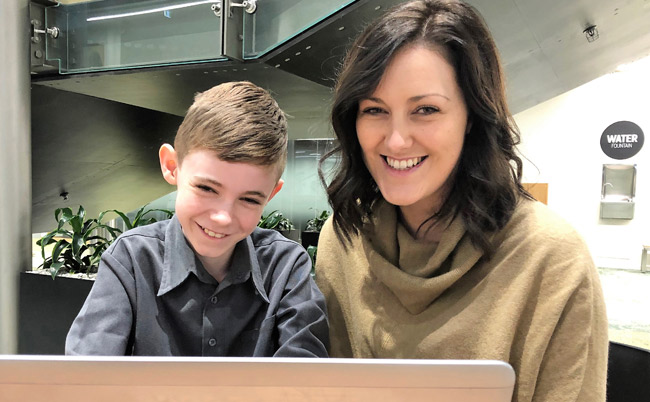 Leanne Ross is taught some of the ins and out of online gaming by son Che.

The social benefits of computer gaming should not be dismissed, says one Dunedin mother and Otago academic.

Dune Corps, a “social development organisation”, founded by Gore man James Wards, brought its multi-player gaming event to Dunedin. It runs sessions for young people “so they can enjoy gaming in a healthier, more social way, giving young people not interested in traditional sports a place to learn the skills of teamwork and enjoy mutual hobbies with their peer group outside of school”.

Mrs Ross says her 10-year-old son, Che, was there.

“Che was diagnosed with high functioning Autism before he was three. We were advised to get him an iPad to help him communicate and he inevitably played games on it,” she says.

“His Autism brought delayed gross motor skills. So sports were hard for him. Playing [computer] games gave him the chance to be the hero, and to lose sometimes, and to work through those emotions.”

"As an educator, I know that some of these screen skills will be vital for our young people when they enter adulthood and the workforce. But I don’t leave my son alone on his device in the same way I wouldn’t leave a child alone at rugby practice on a Saturday."

Moving to gaming online gave Che the opportunity to play in a team, she says.

“We hear Che and his friends work on strategy, problem solve and learn to be gracious winners and losers.

“But we also hear him socialise and practice his conversational skills. He’s developed a confidence through his sense of humour and found a place for himself in the group.

“These are things you only dream about when your toddler is given that kind of lifelong prognosis,” Mrs Ross says.

“I didn’t teach him to read. He would read the subtitles on his games so that by the time he started school he was well ahead of his peers.”

She is aware not all parents share her sentiment on the subject.

“I have plenty of friends and family who are against screen time. That is their choice as parents.

“But as someone who works heavily in the digital space and has to be knowledgeable on how it all works, I realise that it often stems from fear of the unknown. Or an immediate discrediting of anything ‘not like how we were brought up’.”

However, life is not the same as 30 years ago, she says.

“Well, we all recycle now, we are more wary of processed foods, we order our shopping online to spend more quality time with our kids at weekends. There’s a lot of things we do now that didn’t exist when we were children. That doesn’t make them all bad. Everything in moderation is beneficial.

“As an educator, I know that some of these screen skills will be vital for our young people when they enter adulthood and the workforce. But I don’t leave my son alone on his device in the same way I wouldn’t leave a child alone at rugby practice on a Saturday. Wherever they are alone they are open to dangers or negative influences. If you parent proactively, you have nothing to fear,” Mrs Ross says.

She particularly supported Dune Corps ethos of understanding children do not all “fit into the same mould”.

“Instead of it being all sport or nothing with their free time, James is trying to take what children naturally gravitate towards and turn it into a positive, social environment.

“He also knows the health and safety issues, so he adds elements like Nerf gun battles and Lego sessions for computer screen breaks.

“This group isn’t encouraging young people away from traditional, wholesome activities. It’s simply giving those kids who have nowhere they want to go on weekends, a place to belong and develop socially with their peer group,” she says.

Mr Wards started his gaming sessions in Gore in 2017, and has since expanded into Invercargill and Queenstown. He plans to bring the company to Dunedin within the next few weeks. He runs sessions for adults and children.

"We provide the setting, environment, venue and all the equipment for people to enjoy their video game hobby all in the same room."

He says his organisation is primarily a social development initiative that uses video gaming as the “carrot on the stick” to get everyone in the same room talking about bigger issues such as depression and bullying.

“This is a safe social setting for the kids to hang out and have a blast and it's also a great alternative for adults to kick the binge drinking habit that plagues our country when it comes to the weekend off.

“Many people have also made many new friends at our events and have had assistance getting out of a rut of depression as a result.

“Also I have had parents thank me for their children having a hard time at school with bullying, but now are part of a crew of CORPS kids at school that are strong in numbers and they all look after each other,” Mr Wards says.

He is well aware of and prepared for the stigma that still surrounds screen time and video gaming.

“Many conservative types cannot see social benefits of video gaming. Five minutes in a room with 30-plus introverted, socially awkward kids, who have likely never met each other prior to that event, suddenly behaving like they have known each other for years and chatting up a storm with one other about similar interests and hobbies proves that there is a social benefit to multiplayer video gaming,” he says.

“There are also many benefits to kids becoming incredibly proficient with windows operating systems and computers. Many kids who have never touched a computer in their lives begin their first computer game event not knowing how to move their character in game, and in less than four hours, they are hosting their own server on the network.”

There is no target market for the sessions, participants just need an interest in video gaming.

“There is a unique comradery that is experienced at our events when you play co-operative or competitive video games with other people, and this paves the path and the opportunity for people to make new friends,” Mr Wards says.

“Video gaming does not have to be anti-social, but it is when you stay at home all weekend to play online in your bedroom with the curtains drawn all day. We provide the setting, environment, venue and all the equipment for people to enjoy their video game hobby all in the same room.”