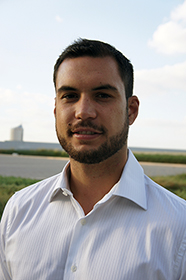 Master of Business Administration graduate Alpha Kennedy says being able to study while travelling for work made Otago an easy choice.

“Being based in the Middle East and travelling a lot, flexibility was important. There was never a paper where I travelled between fewer than two countries while studying.”

He chose to study an MBA because he had reached a point in his career where it was becoming expected that he held a master’s degree.

“I thought that an MBA would open the most doors and give me the broadest scope for the future. At the time I was weighing up between IE, London Business School and Otago. In the end, three things stood out about Otago: the online MBA was to the same standard as the on-campus programme; Otago is world-renowned, and has the highest ranked business school in New Zealand; and the Otago MBA provided opportunities to study a variety of papers at other top universities.”

Highlights of studying at Otago

“A number of lecturers went above and beyond to share knowledge and develop students. Their commitment was inspiring.”

Alpha enjoyed getting to know his classmates, who he describes as “high-calibre both professionally and personally.”

“Everybody wanted to see each other succeed so there was real sense of positivity and comradery amongst the cohort. I also enjoyed learning from the faculty. A number of lecturers went above and beyond to share knowledge and develop students. Their commitment was inspiring.”

He says a study exchange to WU in Vienna was a highlight of his time studying.

“Vienna is a top class city and we took the opportunity to explore – a cocktail evening at the national arts museum was particularly memorable.”

After graduating, Alpha focused on growing Prime Consulting International’s client base in the Middle East and Africa and providing managerial oversight of projects in the region.

His company was encouraging throughout his MBA journey, and since completing the MBA he has been given increasing freedom to develop strategy for the region and contribute to global strategy.

“Commit 100 per cent and enjoy the journey.”