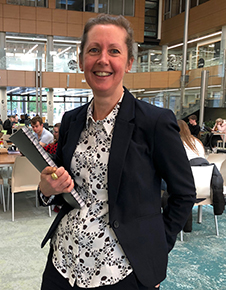 Cherie McConville chats about her research at the Otago Business School.

The goal for Cherie McConville’s doctoral research is a New Zealand-first adventure park for Dunedin, and a new qualification for her.

The Doctor of Business Administration student is almost ready to hand in her thesis that researches the creation of an adventure hub in Dunedin for people of all abilities, ages and backgrounds.

She has already approached and found support from various stakeholders in the city, and after completing her thesis, which includes a feasibility study, Cherie plans to create her detailed business case.

“The dream is to develop an adventure hub in Dunedin, spread over acres and acres of bushland containing a collection of outdoor activities that will challenge people physically and mentally, and provide a level of risk, such as obstacle courses, high ropes course, zip-line and mud slides,” Cherie says.

Prototypes she has co-designed with research participants also include accommodation, a café and canopy tree walk.

The hub would be based on three key principles; environmental conservation, health and wellbeing and most importantly, social equity.

“It is about creating a place for everyone, no matter what their physical ability, no matter what age and stage in life. No discrimination, it’s about catering to everyone.

“What I have found in my research is that no matter what your age, people still want adventure. They want to get out and enjoy green spaces but there are currently so many barriers. These range from being unable to access the tracks and trails around Dunedin, because they are mostly inaccessible for those in wheelchairs, to a lack of play equipment for those with various abilities, to a lack of time and money in order to access the outdoors and adventure,” she says.

Cherie has first-hand knowledge of obstacles faced by people with disabilities; her daughter Poppy (12) has cerebral palsy and is in a wheelchair.

“I love the great outdoors and I love physical activity, but our situation means we can’t get out and enjoy it like other people. And we’re just one family.”

That is what made her project so important, she says.

“This is about social equity first and foremost. We discriminate against those with disabilities in so many ways. The idea of an adventure hub goes some way to address that. If you are differently-able, or are frail and elderly it is extremely difficult, if not impossible to access the great outdoors in terms of tracks and trails out in the bush. Even Ross Creek is a challenge. The beaches are another story.

“Many people think because a piece of equipment is available that it ticks the box on making things accessible, but this just isn’t the case.”

The project is about it being accessible for all people.

“Lots of people find it difficult to access the outdoors. Time is becoming a huge barrier. People have busy lives. Cost is another barrier. Travel to Central Otago to access adventure just isn’t possible due to travel time, the cost of the travel, but also the cost once on location.

“This is important because it’s about accepting diversity and integration.” Cherie believes that when you’re having an adventure or playing next to somebody that is different to you - whether they have braces, a wheelchair, or a hijab - you’re having fun and the differences don’t matter. It all helps to create a society of acceptance.

Part of her research took her to Area 47, an adventure park at the foot of the Austrian Alps, and Morgan’s Wonderland, the world’s first theme park for people with disabilities in San Antonio, Texas.

There are no other such parks in New Zealand, Cherie says.

“It would be a community asset, a bastion for our environment, a drawcard for Dunedin. The list of benefits go on and on.”