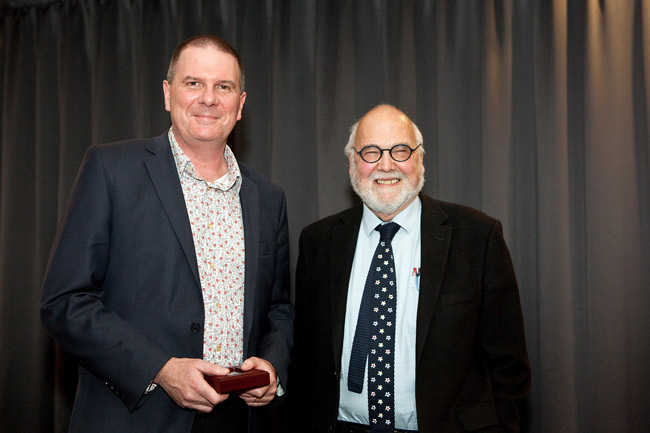 University of Otago Curekids Professor of Paediatric Genetics Stephen Robertson is considered an outstanding leader in his field internationally, and last night his achievements were formally recognised closer to home at the Health Research Excellence Awards in Dunedin.

Professor Robertson, who continues to be an active clinical geneticist attached to Genetic Health Services New Zealand, in addition to teaching genetics to science and medical students, was awarded the Dean’s Medal for Research Excellence. This is awarded for exceptional and sustained work in research in the Dunedin School of Medicine.

"His discoveries in understanding how our genes translate to development, especially of the brain, have led the world."

From 1999 to 2002 he held a Nuffield Medical Fellowship at the Institute of Molecular Medicine at Oxford University, studying the genetic basis of a set of genetic disorders characterised by severe life-limiting malformations in children. As a result, he has identified several genes which lead to malformations in children, with a particular focus on conditions that affect the skeleton and brain. 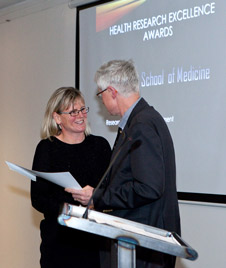 "It is time to think outside of the box for obesity intervention targets and sleep may be just the answer."

Led by Dunedin Hospital Pharmacy Manager Craig MacKenzie and Associate Professor Rhiannon Braund, from the Pharmacovigilance Centre, the project aims to reduce medicines errors for patients being discharged from hospital. They have developed an electronic prioritisation tool to identify patients at risk of admission and are almost set to begin a trial using the tool on high-risk patients to investigate the effectiveness of a Clinical Pharmacist’s intervention.

For the first time, in the awards’ history, two $100,000 grants for Health Service Delivery Research were granted. Usually, there is just one grant.

A Dunedin Hospital-based project investigating the use of naturalistic light to improve patients’ sleep quality, recovery and well-being received one of the grants. Consultant and Senior Lecturer in Respiratory Medicine Dr Ben Brockway, Psychogeriatrician Associate Professor Yoram Barak and Assistant Research Fellow Kristina Aluzaite will investigate whether installing lights that mimic natural sunlight would create a better environment for both patients and staff.

A team from Dunedin Hospital’s Department of Surgery and the Dunedin School of Medicine secured the second $100,000 grant for their project aimed at better health outcomes for surgical patients.