The mysterious Plain of Jars in Laos is now a UNESCO World Heritage Site, thanks in part to work done by a University of Otago palaeopathologist.

The UNESCO classification was formalised in July following significant recent archaeological research, including a large project begun in 2016. That project involved the Lao Department of Heritage, and universities from Australia and New Zealand. The research was published in Antiquity, issue 370, 12 August 2019.

The Plain of Jars consists of more than 100 sites, each containing between one and nearly 400 ancient, giant stone “jars” – some up to three meters tall. The jars’ purpose and the people behind them have remained a mystery over the decades since they were first scientifically studied in the 1930s, though they have long been associated with human burials.

The research reported in Antiquity focused on “Site 1” – the most well-known and accessible site. 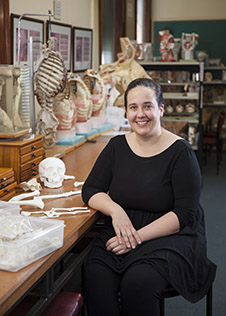 Associate Professor Sian Halcrow, a palaeopathologist from the University of Otago’s Department of Anatomy, in collaboration with Kate Domett (James Cook University) led a small team of academics and local helpers investigating human remains uncovered by the project. An expert in post-excavation analysis of bones, her findings have helped shed light on what the society behind them may have been like.

Associate Professor Halcrow conducted most of her research in Laos – in a museum close to the project’s excavation site – and says despite the human remains being of relatively poor quality, considerable data was gained.

The primary burial of two individuals were discovered at the site – the first time primary burials have been found at the Plain of Jars sites. Many secondary burials – human remains “reburied” after an initial interment or disturbed after burial – were also found in the ground beside the jars and in smaller pottery vessels.

Eighteen individuals were identified from three excavation areas, with 11 of those individuals being infants and children. Many had died at the foetal stage, or in early infancy.

The findings suggest a growing population was present at the time of the burials, Associate Professor Halcrow says. Additionally, detailed studies of dental enamel suggest ill health and/or malnutrition was an issue for the population.

Researchers have dated the study’s finds to between the tenth and thirteenth centuries AD – though previous research has suggested far earlier dates. It is not yet known whether the burials are contemporaneous with the stone jars.

Associate Professor Halcrow says the chance to work on such a significant, mysterious and globally-treasured site was “an incredible privilege”.

“This was a once in a lifetime opportunity to work at the world renowned Plain of Jars site. I hope I have contributed a little bit more to piecing together the puzzle of who were associated with these otherwise enigmatic Megalithic jars.”

And there is a mountain of research that is still possible in the Plain of Jars, she says. Although only 18 individuals were identified, these are from a very small excavated area in what is a very large site. There may be “thousands” of individuals buried at Site 1 – and there are likely well over 100 further sites in the area.

While it is difficult to draw concrete conclusions from the data, Associate Professor Halcrow says it does progress the theory that the jars were most likely associated with burials, rather than being primary burial vessels themselves.

“The bioarchaeological work is significant as it has shown there was likely a large population that was possibly growing in size at or near the site at this time. And this is particularly interesting in light of the new dates that could place this site as being used within the Angkorian Empire.”

Analyses of the human remains and material culture relating to this project is ongoing across the universities involved, as the research team strives to shed further light on what is a unique archaeological landscape.

Excavating among the megaliths: recent research at the ‘Plain of Jars’ site 1 in Laos. Antiquity 93, issue 370, August 2019.