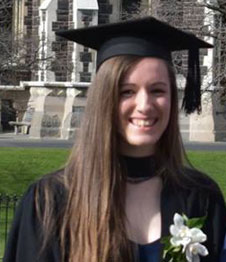 After finishing her undergraduate study in Biomedical science at the Victoria University of Wellington, Liz began a Masters with the Department of Women’s and Children’s Health as part of the Clinical Genetics groups and under the supervision of Professor Stephen Robertson and Dr Christine Neyt.

Her research focussed on the gene MET, which is important in a rare bone disease in children called Osteofibrous Dysplasia. Specifically, she sought to better understand how the processing of this gene is regulated and, in turn, how its dysregulation may result in disease.

Department of Women's and Children's Health