Nietzschean Killers Meet Feminist Cop: Murder by Numbers and the Storying of Leopold and Loeb 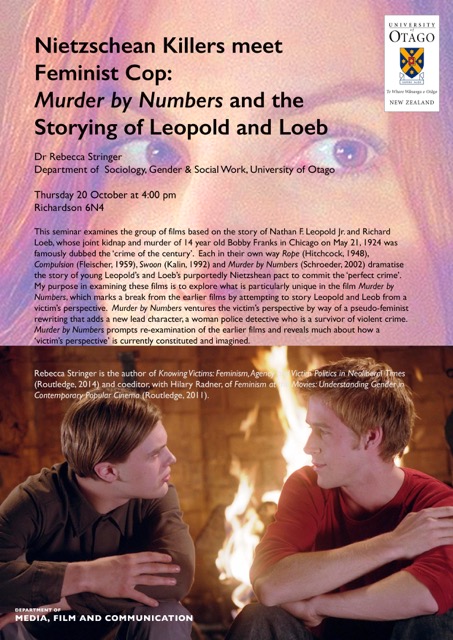 This seminar examines the group of films based on the story of Nathan F. Leopold Jr. and Richard Loeb, whose joint kidnap and murder of 14-year-old Bobby Franks in Chicago on May 21, 1924 was famously dubbed the ‘crime of the century’. Each in their own way Rope (Hitchcock, 1948), Compulsion (Fleischer, 1959), Swoon (Kalin, 1992) and Murder by Numbers (Schroeder, 2002) dramatise the story of young Leopold’s and Loeb’s purportedly Nietzschean pact to commit the ‘perfect crime’. My purpose in examining these films is to explore what is particularly unique in the film Murder by Numbers, which marks a break from the earlier films by attempting to story Leopold and Loeb from a victim’s perspective. Murder By Numbers ventures the victim’s perspective by way of a pseudo-feminist rewriting that adds a new lead character, a woman police detective who is a survivor of violent crime. Murder By Numbers prompts re-examination of the earlier films and reveals much about how a ‘victim’s perspective’ is currently constituted and imagined.

Rebecca Stringer is the author of Knowing Victims: Feminism, Agency and Victim Politics in Neoliberal Times (Routledge, 2014) and coeditor, with Hilary Radner, of Feminism At The Movies: Understanding Gender in Contemporary Popular Cinema (Routledge, 2011).