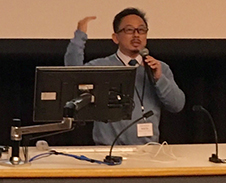 Below are the abstracts and poster presentations. Thank you to all those who participated, particularly under the Microbiome Otago banner, helping to make this such a successful event.

Blastocystis is a ubiquitous, extracellular luminal protist with controversial clinical relevance. The morphological heterogeneity within and genotypic variations amongst Blastocystis isolates have led to much confusion and misinterpretation of Blastocystis biology. Modern imaging platforms, such as imaging flow cytometry, have shed light onthe significance of various forms of Blastocystis in culture, helped dispel certain myths about the parasite’s mode of reproduction, and provided new insights into the mode of action of anti-parasitic compounds. In vitro, ex vivo and in vivo models have contributed to our understanding of Blastocystis pathobiology in relation to adhesion, tissue destruction and host response. More recently, our laboratory has been exploring the role of Blastocystis in the host microbiota using in vitro and rodent model systems. Our results indicate that Blastocystis is not a passive bystander but is able to perturb the host bacterial microbiota in specific ways that may explain its pathogenesis.

Alterations to the composition of the bowel microbiota (dysbioses) are associated with particular diseases and conditions of humans. There is a need to discover new, indigestible polysaccharides which are selective growth substrates for commensal bowel bacteria. These substrates (prebiotics) could be added to food in intervention studies to correct bowel dysbiosis. A collection of commensal bacteria was screened for growth in culture using a highly-branched xylan produced by New Zealand flax. Two, Bacteroides ova-tus ATCC 8483 and Bacteroides xylanisolvens DSM 18836 grew well on this substrate. The utilisation of the xylan was studied chromatographically and by constituent sugar analysis. The two closely related species utilised the xylan in different ways, and differently from their use of wheat arabinoxylan. The growth of Bacteroides species on other plant xylans having differing chemical structures was also investigated. Novel xylans expand the choice of potential prebiotics that could be used to correct bowel dysbioses.

The human gut microbiota is a highly complex community of microorganisms thriving in the gastrointestinal tract. A complex network of syntrophic interactions occurs among the different commensal species, and resource sharing in the habitat defines different ecological niches. Cross-feeding interactions can play an important role in the formation of microbial consortia. Some microorganisms are capable of degrading an accessible substrate that is metabolically unavailable to other commensals. Partial breakdown products can be released and become available to the other commensals. Complex plant polysaccharides are key players in the establishment of syntrophic interactions in the human microbiota. These fibers are commonly present in diet but are not digested by humans, and they reach the lower gut undegraded, representing a rich food source for bowel bacteria and a starting point for bacterial consortium assembly. A small consortium of bowel bacteria has been assembled in vitro to investigate the syntrophic interactions that take place among gut microbial species. Previous screening experiments with several plant polysaccharides and representative microbial species of the human gut microbiome allowed the selection of the components of the in vitro system. Barley beta-glucan is partially degraded by Bacteroides ovatus, leaving oligosaccharides in the surrounding medium that can be degraded by Subdoligranulum variabile and Hungatella hathewayi. Mixed cultures of the three microorganisms were investigated with RNAseq to study the transcriptional responses of the individual species in different conditions. The three commensal species showed differential expression of genes involved in carbohydrate transport and metabolism and stress response, indicating a species-specific reaction to stress levels sensed by the different commensals. Studying how the individual species respond to the available food source, but also to the presence of other bacterial species in the same milieu, can be an initial step to understand how commensals can associate and form consortia around the food source available in their environment. Different plant polysaccharides can determine a different structure and composition of consortia of commensal bacteria, with different effects on the gut ecosystem.

Crohn’s disease (CD) is a form of inflammatory bowel disease that affects as many as 240 in every 100,000 persons. CD is chronic, and there is no cure currently available. While the exact cause of CD has not yet been determined, it has been linked to a number of factors, including the gut microbiome, which produces many types of pro-and anti-inflammatory compounds. These compounds include lipopolysaccharides and short-chain fatty acids (SCFAs). Exclusive enteral nutrition (EEN), a highly-digestible and nutritionally-complete liquid diet, is frequently used in paediatric cases to induce CD remission during flare-ups. However, the mechanism by which EEN is effective remains unclear. To test the hypothesis that EEN modulates microbial communities in the gut, we collected 16S rRNA gut microbiome data, and quantified levels of faecal SCFAs using gas chromatography, from a cohort that underwent enteral nutrition. This cohort included 21 CD patients undergoing EEN for eight weeks, 9 CD patients undergoing partial enteral nutrition (PEN) for eight weeks, and 17 healthy controls undergoing EEN for two weeks. Here, we show that EEN alters the gut microbiome of both CD patients and healthy people, as well as reducing SCFA production by the gut microbiome. Specifically, during EEN, the relative abundance of specific taxa such as the Lachnospiraceae genera Roseburia and NKA4136 decrease in both CD patients and healthy controls. These changes typically recover after resumption of normal diet. This is concurrent with a net decrease in the production of the SCFAs acetate and butyrate. We also show that the untreated gut microbiome of CD patients differs from that of healthy people, with reduced alpha diversity. This data supports the hypothesis of EEN modulating microbial gut communities, and allows insight into the mechanism by which EEN may alter both the gut microbiome and its SCFA production in CD patients.

Members of the bacterial genus Bifidobacterium generally dominate the faecal microbiota of infants. The species B. longum is prevalent, but the subspecies longum and infantis that are known to colonise the infant bowel are rarely differentiated in microbiota investigations. These subspecies differ in their capacity to metabolize Human Milk Oligosaccharides (HMO) in the bowel and may have differing ecological and symbiotic roles in humans. There is therefore a need to ascertain the abundances and prevalence of the two subspecies in culture-independent studies of the faecal microbiota. The literature is currently awash with studies utilising high-throughput amplicon sequencing approaches, focusing on short regions of the 16S rRNA gene (metataxonomics). Whilst valuable, this approach is limited in its ability to discriminate between closely related species or subspecies. We describe the development of a quantitative PCR (qPCR) approach to reliably ascertain abundances of these subspecies in infant faecal microbial communities, and offer comment on the difficulties associated with targeting functional genes when studying geographically diverse study cohorts.The final assay was used to obtain fine-scale detail regarding the structure, abundance and prevalence of infant bifidobacterial communities in cohorts of children from New Zealand and Indonesia. The combination of metataxonomics and focused qPCR allowed details of significantly different population structures between the cohorts to be described.

Inflammatory bowel disease (IBD) is the chronic inflammation of the gastrointestinal (GI) tract. It comprises two main types: Crohn’s disease (CD) and ulcerative colitis (UC). Paediatric onset IBD makes up a quarter of IBD cases and New Zealand has among the highest reported rates of paediatric IBD at 13.06 per 100,000 in 2015. An altered gut microflora,or gut dysbiosis, contribute to the etiology of IBD. Inflammatory markers have been investigated in IBD for diagnostic purposes, for assessing disease activity and predicting relapse, and for monitoring the effect of therapy. The use of inflammatory markers is preferable as measurement of disease activity as symptoms are often subjective, and to avoid invasive procedure, i.e., colonoscopy, which are often a burden to patients. The main aims for this research project are to: 1) understand how the microbiome changes over time in response to disease activity (flare vs. remission); and 2) explore IBD-associated patterns and how they might be affected by geographical origin. In this study, 69 paediatric IBD patients with endoscopically diagnosed IBD were enrolled to the NZ cohort. Up to 11 stool samples were collected from each patient, resulting in 286 samples. A publicly available dataset (RISK) comprising a North American cohort was included and reanalysed in this study to provide more statistical powerand healthy non-IBD controls. Microbiome profiling using 16S rRNA gene sequencing and processing using the DADA2 pipeline showed that alpha diversity was mainly differentiated by disease type, and there was significantly more unique amplicon sequence variants (ASVs) observed in non-IBD samples compared to those with IBD. This indicates that a loss of bacterial diversity is associated with IBD pathogenesis. However, beta diversity through measures of Bray-Curtis dissimilarity did not discriminate between cohort or disease activity, indicating that the overall microbiomes of NZ and North American IBD patients are similar. Further analyses will be carried out to understand how various inflammatory markers give consensus on degrees of inflammation and their relation to gut microbiome.