Assessing the cooking stability and prebiotic potential of flaxseed mucilage

Owing to its established high nutritional profile, flaxseed (Linum usitatissimu), has gained an established reputation as a dietary source of high value functional food ingredients including dietary fibre (Goyal, Sharma et al. 2014, Dzuvor, Taylor et al. 2018). The mucilage in flaxseed is rich in polysaccharides that have prebiotic behaviour (Kajla, Sharma et al. 2015). However, little is known of the stability of the crude mucilage fractions during processing parameters used in normal cooking procedures. As a carbohydrate, it is expected that conditions such as thermal treatment (wet heating such as boiling) at various pH conditions (acid, base, alkaline) may have the potential to induce degradation that can affect the chemical structure and prebiotic potential of flaxseed mucilage. A previous summer research grant from Microbiome Otago was used to study and optimise the extraction of complex polysaccharides from mucilage in flaxseed meal. This study will build on the previous one by looking at the effect of cooking conditions (temperature, time, and pH) on the stability of flaxseed mucilage and how these treatment conditions affect the prebiotic properties of crude flaxseed polysaccharides. Chemical analysis of bacterial culture supernatants will also be undertaken to show the effect of treatments on the prebiotic properties of the carbohydrates.

The following projects were supported by Microbiome Otago over the summer 2017-2018. 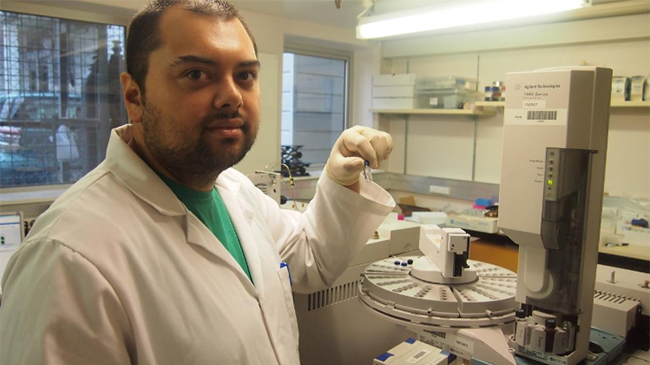 According to scientific literature, flaxseed mucilage has shown promise as a prebiotic. A hot water extraction protocol was developed for the recovery of mucilage from defatted flaxseed meal. The aim was to produce material that could be tested for potential to provide growth substrates for commensal bowel bacteria. Hot water extraction at 90oC for 1 hour at a 1:40 ratio (w/v) yielded the highest concentration of recovery with 91.2 mg of mucilage per gram of defatted flaxseed meal; further thermal treatment did not improve yield significantly. High levels of protein contamination in the crude extract were reduced with the isoelectric precipitation of proteins using 0.1 M HCl to adjust the pH to 4 and 0.1 M NaOH to re-adjust the pH to the original value, which on average was 6.8. Mucilage was then precipitated out of solution using isopropanol in a 1:3 (w/v) ratio and freeze-dried. Further work is needed to produce material that can be used in bacteriological testing and carbohydrate analysis.

Jordan reports that this project was challenging, but also very rewarding. “As I come to completing my project, I now feel confident in my knowledge and abilities as a graduate.”

He explains the project in more detail: “The mucilage layer on the surface of flaxseed contains some complex carbohydrates, such as arabinoxylans, that could be of interest to the human gut microbiome. The first stage of my project used cold-pressed flaxseed meal (the by-product of flaxseed oil production) and developed a protocol to optimise extraction of flaxseed mucilage, and also the removal of other constituents such as residual lipids and proteins from the seed. This proved to be an interesting challenge, as much of the literature avoided using cold-pressed seeds due to the high levels of protein being released from the inside of the seed. After trying different protocols and some literature investigation, I was able to develop techniques to solve issues such as this and other situations that developed.

What is amazing about a summer studentship is the ability to solidify the knowledge and techniques you have acquired from university. Throughout my time at Otago, I have learned many protocols. Being able to propose these protocols to investigate and solve problems during this project not only helped me understand what I have learned in new contexts, but also built my confidence in the knowledge I have acquired. It is an amazing feeling to recall an experiment that you performed in a lab, and adapt it to your project and have it actually work. Because of this opportunity, I am more determined to pursue post-graduate studies as the exposure to research has been incredible and exciting. I would recommend any student to give a summer studentship a go. It is a challenging experience but is very rewarding. In particular, I think a summer studentship would be helpful to someone about to graduate as it can give you the confidence you need and help elevate your skills before you enter the industry. It can also give you a solid foundation to understand the role of research and help you better prepare for an honours or masters project.“

Inflammatory bowel disease (IBD), comprising Crohn’s disease and ulcerative colitis, arises from the complex interplay of aberrant immune responses to the gut microbiota in genetically susceptible hosts. However, it remains unclear whether IBD-associated gut dysbiosis contributes to disease pathogenesis or is secondary to gut mucosal inflammation. To better understand how the gut microbiota contributes to the inflammatory cascade in IBD and vice versa, we integrated three sets of stool sample sequence data from the paediatric New Zealand and North American IBD cohorts and characterised two microbial ecology metrics (e.g. alpha and beta diversity) within the dataset. IBD patients exhibited no consistent differences in beta diversity results, but analysis on alpha diversity detected a drop in indices even in new-onset IBD patients, indicating that dysbiosis is associated with IBD pathogenesis. Our results aim to provide translational potential to the relevance of the gut microbiota to the diagnosis and prevention of paediatric IBD.

The gut microbiota of infants is dominated by the genus Bifidobacterium. This study aimed to characterise the relative abundances and prevalence of bifidobacterial species in the faeces of Indonesian (n=209), New Zealand (n=73), Australian (n=90) and Singaporean (n=102) infants using quantitative PCR (qPCR), focusing on B. longum subsp. longum and infantis. Specific primers were used to amplify the sugar kinase gene of subsp. longum and the sialidase gene of subsp. infantis. The results indicated subsp. infantis was in higher abundance and prevalence for Indonesian infants, with subsp. longum higher for the other cohorts. When compared to previous high throughput DNA sequencing results, based on the 16S rRNA gene, the relative abundances obtained by qPCR were low. Overall, the results of the project showed that the use of the kinase and sialidase genes in qPCR to determine relative abundances of subsp. longum and infantis is suboptimal, but indicated differences in prevalence of the subspecies in Indonesian infants relative to those in other countries.