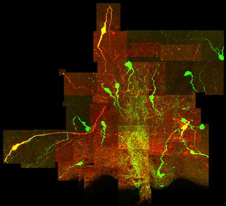 Nearly 40% of women suffering form infertility are unable to ovulate normally. While it is known that the gonadotropin-releasing hormone (GnRH) neurons in the brain control fertility, the molecular and cellular characteristics of the sub-population of GnRH neurons that drive ovulation are not established. This project aims to identify and characterize the specific GnRH neurons responsible for generating the "GnRH surge" that initiates ovulation. This will be achieved by implementing cutting-edge optogenetic neuroscience methodologies that will allow the electrical activity of "GnRH surge neurons" to be recorded. In addition, the use of a novel genetic cell activity detection strategy will allow the electrical membrane properties and gene expression profiles of GnRH surge neurons to be identified. These studies will generate an in-depth understanding of the key cells that drive ovulation and thereby provide a platform for developing therapeutic agents for fertility control.

The gonadotropin-releasing hormone (GnRH) neurons control fertility in all mammals including humans. We have recently discovered that GnRH neurons have a cellular process previously unknown in the central nervous system termed a "dendron". We propose that the unique features of the GnRH neuron dendron allow neural inputs to generate and modulate the pulsatile release of reproductive hormone levels in the blood. Correct levels of hormone pulsatility are critical for fertility. This project will use innovative neuroscience technologies to identify the neural inputs acting upon the dendron and then establish their physiological role in regulating the secretion of GnRH. Together, these studies will determine how this unique neuronal structure operates and provide a foundation for exploring the utility of dendron-targeted therapies for fertility control in humans.