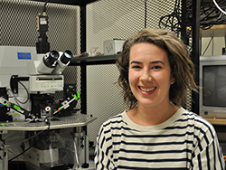 What is the key to successful post-grad research? According to Julia Gouws, a master’s student and recent winner of two prestigious summer research awards, the key is a good supervisor. At the end of her neuroscience undergrad Julia wasn’t sure what she wanted to do. “I didn’t really think I’d ever be interested in research,” she said, “but after meeting with some potential supervisors I decided to keep going and do my honours with Karl.”

Completing her honours research in Karl Iremonger’s lab seems like it made all the difference for Julia. “Going into that lab really resparked my interest,” she said, “because they’re all so interested in it, and so passionate, it made me really like it as well.” In that first year she was looking at brain cells that trigger the release of stress hormones, corticotrophin releasing hormone (CRH) neurons, and testing whether the whole population could be manipulated to express a new green protein, GCAMP6f. This would make it much easier to identify and test those neurons without accidentally interacting with other neurons. It took a year to ensure that only the CRH neurons were expressing the protein, but the work was successful.

It was gruelling work, but Julia was hooked. So when Karl approached her partway through the year to do another project over summer, she jumped at the chance. Julia set out to see what would happen to CRH neurons in mice who were exposed to the stress hormone corticosterone for an extended period of time. Using the mouse model she’d been examining in her honours degree it would be easy to find and test the neurons after the mice had been exposed. The mice were given the stress hormone for two weeks, and then Julia had a look at their brains. What she found was that CRH neurons were much less active in the mice who had been exposed to stress hormones for a prolonged period of time. This wasn’t a ground-breaking result. CRH neurons are known to have a feedback system designed to stop the stress response from getting out of hand. The project simply added more weight to this established understanding.

The most interesting side of the work, which Julia ended up writing up for her final report, hadn’t even been planned. “We were testing male and female mice,” she said, “so Karl suggested I have a look and see if there were any sex differences.” Once she was looking for it, the difference was clear. “The [stress hormone] treated females had more CRH neurons active than the males, which suggests that they’re less sensitive to negative feedback and probably have higher natural levels of stress.” It’s an important finding that fits alongside a growing body of evidence differentiating the sexes. Without intending to Julia managed to produce work which could help to inform more effective scientific practices in the future.

“Stop me if I’m rambling,” she says a few times during our interview, “I could talk about this all day.” The way she speaks isn’t rambling at all, it is careful and precise, breaking down steps, measurements, and tests used to carry out her experiments. For someone who was once unsure about research, her passion for it now is clear. It’s that passion which won her the BMS Dean’s Prize for best summer scholarship report, and the OMSRS summer student speaker award. It’s that passion which has her finishing her master’s now. “I got into med school over the summer,” she says, “but I really wanted to stay on, and learn more, and finish the work off.” Even with those seven years of medicine ahead of her she’s not ruling out coming back for a PhD. “I’ll probably still be here when I’m 30,” she laughs.

Julia has achieved some truly impressive results during her time in the Iremonger lab, but she sees the whole experience as a team effort. “If I had to deal with all the breakdowns that happened over [the summer project] the lab would probably be on fire and I’d just be crying in the corner,” she says, “having people you can go to and ask for help has really made all the difference.” Looking back at her achievements, it’s hard to disagree.