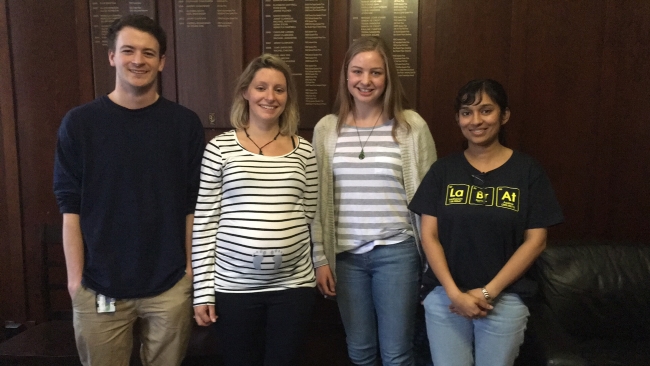 The Medical Sciences Congress at this year’s Queenstown Research Week was attended by a large delegation of about 40 CNE researchers to present their work. Representatives of the various scientific societies where impressed by the quality of the presentations and awarded three CNE members with prizes.

Dr. Elodie Desroziers from Rebecca Campbell’s group received the ‘New and Emerging Researcher Prize’ from the Physiological Society of New Zealand (PSNZ) for her work on the role of GABAergic neurons in fertility. Shalini Kumar, PhD student in Colin Brown’s group was runner up in the PSNZ’s ‘PhD Student Poster Prize’. Rachel Nunn from the Anderson group impressed the judges of the New Zealand Society of Endocrinology (NZSE) with her work towards her Honours thesis on the hormone leptin and its effect on fertility. She received the NZSE’s ‘Best Student Presentation Award’. Also presenting his research undertaken as a fourth-year student, Michael Perkinson from the Brown Lab took home the ‘Poster Prize’ from Hypothalamic Neuroscience and Neuroendocrinology Australasia (HNNA) for his poster titled 'Alpha-Melanocyte-Stimulating Hormone Switches from Inhibition to Excitation of Oxytocin Neurons in Mid-Pregnancy'.

CNE’s performance was perfected on the final night, when Prof. Greg Anderson and Dr. Joon Kim presented this year’s dernier cri laboratory fashion on the catwalk at the Fashionomics social event. Designed and put together by Shalini Kumar, Dr. Teodora Georgescu and Kirsten Carter, the costumes sourced from lab items transformed the models into ‘Donald Gump’ and ‘Jim Jong’, world-leaders in laboratory fashion. In this hard-fought contest the CNE team could convince the judges and, in the end, took home the trophy as the overall winner showing that the Centre for Neuroendocrinology is not only smart, but also looking good!