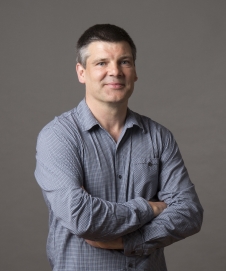 Professor Colin Brown is a neuroendocrinologist; he examines how hormones, generated in the brain, impact brain and body functions. “The thing that ties all of my research together is really extremely uninteresting,” he says, “and that’s the regulation of posterior pituitary function.” ‘Uninteresting’ isn’t exactly how I would describe it. This pea-sized collection of nerve endings on the underside of your brain release two hormones, vasopressin and oxytocin, directly into your blood stream. Those hormones affect blood pressure, body temperature, aggression, affection, milk production, and so much more. What these hormones do, and how they do it, is controlled by a plethora of other cells in the brain all feeding signals together to decide whether to release or to not release the hormones. Those controlling cells are the ones Colin is investigating, because the better you understand the inner workings of the system, the better prepared you are to fix it if it goes wrong.

The name ‘oxytocin’ might be familiar to you. For the past 20 or so years it has been touted as ‘the love hormone’, a title Colin says is “a bit of a misnomer”. While it’s certainly associated with bonding behaviours its main job as a hormone is to drive labour and lactation. The effect of oxytocin on birth is so powerful that drugs blocking oxytocin are used to delay labour, buying precious time for those who go into labour early. The current drugs have a wide effect, blocking oxytocin action everywhere, possibly getting in the way of oxytocin’s other jobs like managing kidney function, lactation, and bonding. The regulating neurons that are responsible for your kidney function are probably not the same ones that make women go into labour, the information they need just doesn’t overlap enough, so if we can pinpoint which ones are responsible for birth then we can avoid the unnecessary side effects. This is, in part, what Colin is doing.

Colin and his team are investigating a group of neurons that they think may be driving oxytocin during labour. These neurons release a chemical called kisspeptin, which then stimulates the oxytocin neurons. What Colin has found is that the oxytocin neurons don’t care about the kisspeptin signal until the end of pregnancy. It’s only when labour is most likely to occur that the oxytocin neurons start listening to that kisspeptin signal. The problem is that if the oxytocin neurons start listening too early then kisspeptin could set off a chain reaction leading to preterm birth. If he’s right then labour could be controlled by manipulating the kisspeptin neurons, instead of blocking the effects of oxytocin around the brain and body. It would be a much less risky way of delaying labour, and reduce or eliminate side-effects for both mother and baby. “The thing with preterm birth,” Colin says, “is that for very early preterm if you can hold things off for just one or two days it has the potential to make a huge difference to their long term health.” While he certainly doesn’t think that this one signal controls labour entirely, controlling it could be enough to give those babies the time they need to make it through.

While the work he does with vasopressin is still related to oxytocin, they’re both secreted from the same place after all, it’s very far away from questions about birth; focusing on the middle-age curse of hypertension. Hypertension, or high blood pressure, itself is asymptomatic however it puts people at risk for a range of cardiovascular problems. Heart disease, heart failure, stroke, and chronic kidney disease have all been tied to hypertension. What is worrying is that in 95% of cases hypertension just happens, with no known cause, it essentially appears out of nowhere. Vasopressin is meant to control your blood pressure, but what Colin has found is that it may be part of the reason hypertension gets out of control. “What we’ve found,” Colin says, “is that once you get to that hypertensive level which is not healthy, but without noticeable symptoms, the vasopressin system engages and ramps it up.” It’s surprisingly poor design, and for the past few decades it has been almost completely ignored. To get past years of dogmatic belief that vasopressin isn’t responsible for hypertension, Colin had to put in the hard yards.

Colin had to design an experiment to raise blood pressure only a little so that it didn’t cause any side-effects that could themselves affect vasopressin neurons. If vasopressin was active in that experiment, then it was acting on blood pressure alone. He used genetically modified rats that, when fed a chemical trigger, would have its blood pressure increase in proportion to the amount of trigger chemical in the diet. It worked. Colin and his team were able to increase blood pressure just enough to make the rats hypertensive, and then they looked at the vasopressin neurons; they had increased activity enough to further increase blood pressure. “You just want to make the cart wheels wobble a little, and then see what happens,” Colin said, “Does it adapt by making the cart wheels straight again? Or goes it adapt by making them wobble harder? In this case we found that it made them wobble harder. Bad design.” What Colin found was that, despite dogmatic belief to the contrary, vasopressin contributes to the development of hypertension.

The brain does more than think, it controls, and it’s not always great at its job. We like to think that physical ills, like heart disease or early labour, are the result of the organ we’re looking at, but it’s not always that simple. Taking care of the body, through diet and exercise, is important, but so too is recognising that the health of our body is directly connected to the functioning of our brain. So, while the regulation of the posterior pituitary may seem ‘extremely uninteresting’, it’s also absolutely crucial in every step of our lives. Understanding it, as Colin Brown and his team have set out to do, could help us in ways we may never have imagined.