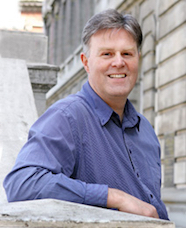 Professor Allan Herbison is a neuroendocrinologist working with some of the strangest cells in the human body; gonadotropin-releasing hormone (GnRH) neurons. These neurons sit in the hypothalamus, the hormonal centre of the brain, and drive reproductive function by releasing the hormone GnRH into the anterior pituitary, which sits just below it. How often, and how much, GnRH is released impacts fertility. By understanding how these neurons work on a fundamental level, Allan and his team hope to develop what he calls ‘beneficial regulation of fertility’: increasing fertility for those who want to conceive, and eliminating fertility for those who don’t.

Around a quarter of all kiwi couples receive treatment for infertility, and in a third of those cases infertility is caused by a lack of communication between the brain and the ovaries. This is where Allan and his team are focused. In order for the ovaries to work properly, GnRH has to be released in specifically timed pulses. It’s a goldilocks scenario: If the pulses of GnRH are too fast the system doesn’t work, if the pulses are too slow it doesn’t work, but if the pulses are just right then the ovaries remain fertile. These pulses are maintained consistently over a female’s reproductive lifespan. One pulse per hour, each lasting 10-15 minutes, keeps the system going. When it comes time, roughly once a month, to ovulate the GnRH neurons do something strange; instead of continuing their constant pulsing they release a surge of GnRH that lasts for 2-3 hours, and then they go back to their normal pulsing. How do they do this?

Allan and his team believe that these two behaviours, the pulse and the surge, are controlled by neurons that send signals to the GnRH neurons using a chemical called kisspeptin. There appear to be two distinct groups of these neurons, one that Allan believes controls the pulse and the other which he believes controls the surge. Thanks to the strange nature of the GnRH neurons, testing this theory has been incredibly challenging. Most neurons that work together tend to clump together, this means that usually you can point to a spot in the brain and say ‘this collection of cells does this’. GnRH neurons aren’t like normal neurons. Not only do they migrate into the brain from the nose, but once they reach their destination in the hypothalamus, they spread out. In order to find out if kisspeptin was regulating GnRH neurons Allan first had to find the GnRH neurons.

Transgenic animal technology has made this much more straightforward. A transgenic mouse was developed that expressed a specific protein in its GnRH neurons, this new protein would glow green under a fluorescent microscope. By looking at the brain of this animal, researchers could see exactly where the GnRH neurons were and, by association, which neurons were communicating with them. At this close-up cellular level it looked like those kisspeptin-releasing neurons were regulating the GnRH neurons, but Allan’s work is about function not just form. A close physical relationship suggested that kisspeptin was important, and so Allan took the next step: determining just how important it was.

Allan and his team try to conduct research which covers the system at every level: molecular, cellular, and whole animal systems. Only by understanding the whole can we make any meaningful conclusions about it, or have any solid ground to stand on when considering treatments. So far, using optogenetics, blood sampling, and fibre photometry, Allan and his team have been able to point to kisspeptin as being the driving force behind GnRH pulses. Now they’re turning their attention toward the surge.

This is basic science, but that doesn’t mean it’s easy. Allan’s work is there as the foundation, he and his team examine how a system works and then other researchers take those findings and apply them to real-world issues. By laying out the relationship between kisspeptin and GnRH pulses this work could help inform treatments for issues like polycystic ovarian syndrome, and hypothalamic amenorrhea, allowing those affected by them to have relief from the symptoms and side-effects of reproductive dysfunction. By laying out the driving force behind the GnRH surge, Allan and his team could provide the basis for both a fool-proof contraceptive and a means to enhance fertility. Not bad for the strangest cells in the human body.