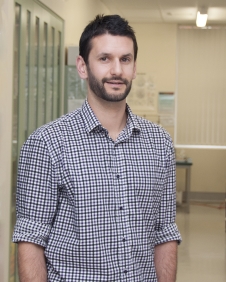 Dr Karl Iremonger has spent his academic career examining how neurons in the hypothalamus function. During his PhD, he studied hypothalamic neurons that control water balance and then during his postdoctoral training he focused on hypothalamic neurons which control fertility. Karl’s current research centres on understanding the regulation of the neurons that control stress; the corticotrophin-releasing hormone (CRH) neurons.

CRH neurons are located in the paraventricular nucleus of the hypothalamus and, when activated, stimulate the downstream release of stress hormones from the adrenal gland. These hormones increase available energy, and suppress costly metabolic functions in order to give you the edge in surviving a short-term stressful event. They increase blood sugar and mobilise other fuel stores, while also suppressing the immune system and, potentially, disrupting the reproductive system. It’s a short-term boost to get you through.

The CRH cells respond to both physical and emotional stress. Physical stress information is relayed to the CRH neurons through the base of your brain, the brainstem. Factors like your glucose levels, blood pressure, blood oxygenation levels, and blood volume give the CRH neurons vital information about the physical state of the body. So, if you were deprived of oxygen, running from a predator, or approaching starvation, that information would be used to trigger a stress response. Meanwhile, emotional stress information comes from higher order brain circuits, such as the prefrontal cortex, and amygdala.

Current projects in Karl’s laboratory focus on understanding what factors activate CRH neurons, but also the feedback systems that control the hormonal stress response. Like the rest of the brain, the stress system is always learning. When stress hormones are released in response to a stressful event they dampen subsequent release, preventing the stress response from growing out of control. Using a technique called fibre photometry, Karl has been able to record CRH neuron activity in awake and behaving animals. This access into the brain enables him and his team to see how CRH neurons encode the internal experience of stress. These experiments also allow Karl’s team to see when the stress response turns off in the brain and the role stress hormones play in shutting off these neurons.

Other work in Karl’s lab focuses on understanding how the connections between neurons, called synapses, change. Karl and his team use electrical recordings from CRH neurons to specifically examine synaptic function. His research has shown that CRH neurons release molecules called endocannabinoids which inhibit communication between neurons under some circumstances, but enhance communication in other situations. These types of synaptic plasticity may allow CRH neurons to respond differently and adapt their responses before and after experiencing stress.

Research into how the brain controls stress is important, because of the high incidence of stress-related disorders in the population. While there are dedicated systems within our brain to control the stress axis, these systems can sometimes break down. These neural systems are extremely complicated, therefore it’s important to understand how they work in order to properly treat them when they fail. The work of Karl and his team provides insight into the neural systems that control stress and the changes that may occur in stress-related disorders.