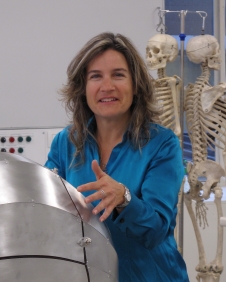 Associate Professor Christine Jasoni is a developmental biologist focused on understanding the developing brain. “What we’re primarily interested in, in my lab, is how early life challenges affect the development of the brain,” Christine explains. Early life, in this case, means ‘before you’re born’, when your brain is still laying down circuits and shaping into a functioning organ. It’s an incredibly vulnerable time for the brain. “There is all sorts of public health data which shows that when a mother is in mental or physical adversity during her pregnancy her child is at a much higher risk for neurodevelopmental disorders,” Christine says, “we’re trying to figure out why that is.” While other researchers in the area have focused on the effects of smoking, drinking, or maternal infections, Christine’s work looks at the impact of maternal obesity and gestational diabetes.

Epidemiological studies have shown that children whose mothers were obese, or experienced gestational diabetes, during their pregnancy are at a higher risk for obesity, metabolic imbalances, ADHD, anxiety, depression, autism, and schizophrenia. “When a mum has health issues during pregnancy her fetus also has health issues,” Christine explains, “the two are sharing all of their resources, so it makes sense that if a mum is happy or sad or not feeling well then the molecular correlates of those things will interact with her developing fetus.” One of the molecular correlates which could be impacting these developing babies is the hormone leptin.

Leptin is released as a signal for your body to stop eating, it stops you from feeling hungry. As your body-fat increases so does the concentration of leptin in your body. This high concentration eventually leads to leptin resistance, which leaves people feeling genuinely hungry at all times. The developing babies of obese mothers are exposed to very high levels of leptin, which in theory could cause leptin resistance prior to birth, but Christine says this kind of leptin resistance is unlikely. “There is no evidence of classical leptin receptors being present or becoming active before birth,” she says, “so even if there is a high level of leptin in fetal brains, it shouldn’t have an effect.”

But she is not ruling out leptin resistance entirely. Hormones interact with the cells of your body in the same way as any other signalling chemical or molecule. They bind to receptors, and those receptors set off an effect within the cell. While these signalling chemicals and molecules are usually very different their effects can have overlaps. One group of molecules whose effect on cells overlaps with leptin are cytokines. “Immunological cytokines set off a very similar chain of cellular events,” Christine says, “so it may be that these cells become resistant to leptin even before they can respond to it.” The presence of a high level of cytokines in the developing brain may cause leptin resistance and subsequent metabolic problems for that child. But what do cytokines have to do with obesity?

Cytokines are signalling molecules which are produced during an immune response or in response to inflammation in the body. People with obesity have a higher concentration of cytokines in their bodies than non-obese individuals. Christine and her team are currently examining whether exposure to elevated levels of cytokines during development could explain some of what we’re seeing in children of obese mothers. If this is the case, it would explain why the impact of obesity on developing babies is so similar to infection or to stress, two factors which also result in elevated cytokine levels.

Christine and her team are also attempting to tackle the question of why these developmental disorders affect some children and not others. They’re in the process of identifying differences in the genetic expression of mice who had obese mothers versus mice who did not. Once she and her team have a better idea of which genes are involved she plans to look at variations of those genes, to try to develop a full picture of individual risk. “We’ve all heard those stories where one person smokes every day and never got lung cancer, but another person never smoked in their life and they died of lung cancer,” Christine says, “clearly some people have beneficial genetics and other people have not so beneficial genetics. So, working out what your genetic risks are is really huge.”

Once they can identify those who are the most at risk it’ll be easier to provide support and interventions to help these kids as they get older. Research has shown that children at risk of developing anxiety and depression, due to maternal stress, were able to eliminate those predispositions by learning how to manage their stress at an early age. At the moment, early intervention is the only way we have to minimise the risks to these children as they develop and, for Christine, it’s a much more appealing option than giving medication to an infant.

While her work is fuelled by a very real issue, it is firmly rooted in basic science. Examining how these systems develop under normal circumstances in order to better understand the differences she sees in the ‘at-risk’ brain. From genes, to molecules, to cells, to circuits, Christine is working to uncover how our brains develop and respond to challenges. It is an incredibly broad scope, and one which has the potential to not only impact developmental biology, but the lives of some of our most vulnerable individuals.