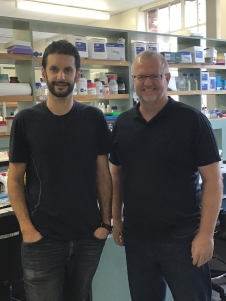 Dr Karl Iremonger is interested in the brain circuits that regulate stress. Together with Prof Dave Grattan (Associate Investigator) he has now received funding from the New Zealand Health Research Council to investigate the neuronal mechanisms that control the changes in behaviour and stress levels during pregnancy and early motherhood over a period of 3 years.

The two group leaders from the Centre for Neuroendocrinology combine their expertise on pregnancy and lactation (Grattan, on the right in the picture) and the brain’s regulation of stress responses (Iremonger, on the left). When a mother expects a baby and is nursing, she changes her behaviour and shows reduced levels of stress and this is mediated in part by the hormone prolactin. These changes are important as they benefit the mother and protect the child from excessive stress. Another hormone, corticotropin-releasing hormone (CRH), is used by certain neurons in the brain to regulate stress levels in the body. These neurons, however, lack the receptor for prolactin, indicating that the changes in stress levels during motherhood must be relayed from upstream neuronal circuits. The project’s aim is to determine how prolactin sensitive neurons in the brain control CRH neurons and hence stress responses during pregnancy and lactation. This will give important insight into the plasticity of the brain essential for safeguarding the health of mother and child during the perinatal period.

Karl and Dave's grant success has also been featured in the Otago Daily Times.