A lactation hormone in males? 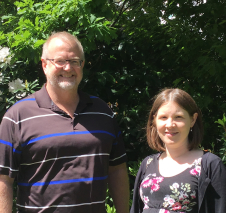 The hormone prolactin has many functions beyond its originally described role in milk production. Prof Dave Grattan and Dr Rosie Brown have now received funding from the Royal Society Marsden Fund to investigate the role of prolactin in parental behaviour of fathers at the Centre for Neuroendocrinology.

Previous work by the two group leaders has shown that prolactin, among other roles in addition to milk production, is critically important in the brain to regulate nursing and protective behaviour in breastfeeding mothers. In mouse models deficient of prolactin in certain brain regions, mothers tend to neglect their offspring and fight off intruders less effectively. The new 3-year project, funded with $960,000, will investigate whether prolactin plays a role in shaping the behaviour of fathers too. This would provide an explanation for the longstanding question about what this "lactation hormone" actually does in males.