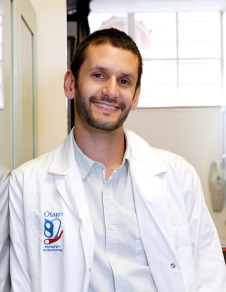 Dr Karl Iremonger is this year’s recipient of the Rowheath Trust Award and Carl Smith Medal. The University’s early career award recognizes outstanding research performance, including the discovery and dissemination of new knowledge and development of innovative technology.

In a public lecture titled “Neural Signatures of Stress” prior to receiving the medal Karl presented his research on how the brain regulates and is influenced by stress. Key player in the brain’s regulation and response to stress is a small population of so-called corticotrophin-releasing hormone (CRH) neurons which drive the release of stress hormones from the adrenal gland. Karl’s lab has developed new technologies to record the activity of these cells in freely moving animals. This research allows to look at CRH neurons in ways that have been impossible to do before and has generated remarkable new insights into how long- and short-term exposure to stress changes the activity of the brain’s stress centre.