Three Marsden grants for the CNE 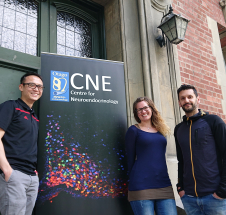 In this year’s funding round by the Marsden Fund of the Royal Society three researchers of the Centre for Neuroendocrinology have been successful in attracting research support. Drs Kristina Smiley and Joe Yip both receive a Fast-Start Grant as emerging researchers and Karl Iremonger is awarded a Standard Grant.

The projects will run for the next three years to investigate the brain pathways to become a good father (Smiley), communication changes in the brain during pregnancy (Yip), and how the release of stress hormones is regulated in the brain (Iremonger).

Male mice undergo a dramatic change in behaviour towards infant mice when they are becoming fathers. This transition is triggered by the act of mating and the hormone prolactin, known best for its role in milk production, surprisingly, has been shown to play a role in the father’s behaviour. The Fast-Start Grant ($300,000) will allow Dr Smiley to determine the changes in the brain and how they lead to good parental behaviour.

Dr Joe Yip is also addressing the role of prolactin in parenthood, but he is interested in the mechanisms behind its classical role of regulating milk production. Prolactin release is tightly controlled by the brain and the responsible brain cells during pregnancy undergo dramatic functional alterations by changing their ‘language’ (neurotransmitter) which they use for communicating with other cells. The project will investigate whether these changes only affect prolactin levels, or whether they also influence other adaptations of the mother’s organism to the pregnancy.

Excessive release of stress hormones can be detrimental to health, but the mechanisms preventing uncontrolled release are unclear. Dr Iremonger’s group has recently identified a brain region in which the release of stress hormones can be modulated in a previously unknown manner. This grant ($960,000) will examine the novel mechanism to learn more about how the brain regulates stress responses.