Mood, appetite, and breathing – 3 new projects at the Centre 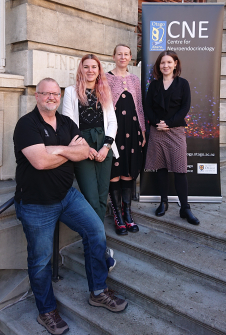 The bodies (and minds) of women undergo significant changes during pregnancy, and some of these changes can be more desirable than others. Researchers at the Centre for Neuroendocrinology have received funding to study the underlying changes in mother’s brains, when their appetite and breathing change during pregnancy and what may go wrong if they develop mood disorders after giving birth.

During this year’s round of funding by the Health Research Council of New Zealand 3 project grants (total ~$3.6 million) were awarded to research teams at the CNE.

Dr Rosie Brown’s (co‑PI Professor Dave Grattan) project is titled “Hormones and mood: Imaging the impact of obesity on maternal neural circuitry”. Obesity in mothers is associated with an increased risk in developing postpartum mood disorders. This project will investigate the activity of neurons in a mother’s brain which are essential for caring for their offspring, and will study how obesity affects the activity of these neurons while the mothers interact with their offspring.

Dr Sharon Ladyman and co‑PI Professor Dave Grattan will investigate the activity of appetite-controlling neurons in the brain during pregnancy. In their project “Activity of orexigenic AgRP neurons during pregnancy and lactation” they want to find out how these neurons change their behaviour so the mother’s food intake matches the increased energy demand of the growing fetus, and to store energy as fat in preparation for lactation.

For a healthy pregnancy and to provide sufficient oxygen for offspring development, mothers need to change their breathing patterns and these changes are driven by pregnancy hormones. Sometimes these adaptions to pregnancy, however, can go wrong resulting in complications such as shortness of breath and sleep apnea. For the project “Hormone-induced adaptations in respiratory function during pregnancy” researchers Professor Dave Grattan and co‑PI Dr Teodora Georgescu together with Professor Julian Paton (AI, University of Auckland) will measure activity of breath-controlling neurons in the brainstem in real time in undisturbed mice during pregnancy. Specifically, they will test whether and how the hormone prolactin can influence the firing of these “breathing-neurons” and thereby change breathing patterns and oxygen intake.