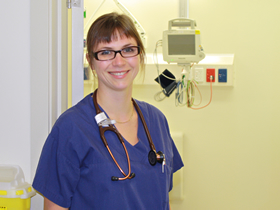 After witnessing her parents benefit from major surgery, Deborah Friberg began to wonder if medicine might be the career for her. She'd enjoyed books from well-known neurologists such as Oliver Sacks, and thought medicine would complement her fascination with the brain and her hands-on approach to artistic pursuits.

After thinking about her possibilities, Deborah decided Otago's Neuroscience programme particularly appealed. It enabled her to leave the option open for a future medical career, while also gaining a broad understanding of basic biological sciences.

With the Neuroscience programme "you’re focusing on the brain, but you get to work in anatomy, physiology, pharmacology, psychology, and even zoology," Deborah says.

During her studies Deborah was able to secure summer research scholarships in such diverse areas as neuroendocrinology and bioethics. These opportunities complemented key research skills gained during her studies, including writing, using databases, and critically evaluating published research.

In her third year Deborah focused on neuropharmacology, neurophysiology, and neuroanatomy. This proved to be a good choice when she ultimately decided to pursue a medical career.

"The basic biological sciences helped me out a lot in the second and third years of medicine. They gave me a very good grounding, which helped me do well in those two years. This meant that I probably didn’t experience the same intensity as other students who’d come to medicine straight out of Health Sciences First Year," Deborah explains.

Now a house surgeon at Dunedin Hospital, Deborah's looking forward to taking the next step. Obstetrics and gynaecology, general surgery, and neurosurgery are just some of the options now open to her.