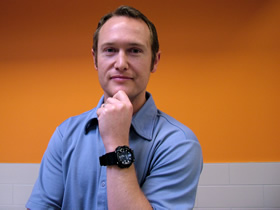 While studying first-year psychology and philosophy at Otago, Matthew Goddard realised he was becoming increasingly absorbed in the material and was hungry for more. Excited by the option of doing a double major in neuroscience and pharmacology, Matthew switched into the Neuroscience programme.

"By the time I started doing second year neuroanatomy and neurophysiology papers, I found the course really started to get interesting. My grades picked up as I went too," Matthew says.

"By the end of third year, and especially in fourth year, I felt more capable and had gained a lot of confidence for independent and critical thought... Seeing my grades improve and being invited to do an honours programme in physiology was very uplifting."

After his fourth year studies, Matthew continued on to undertake a PhD at Otago. Since graduating in 2008, this has led to a range of interesting roles in New Zealand and overseas.

Matthew initially worked in public health doing statistical reporting, before heading to Germany to take up a postdoctoral position in a neurotechnology group. Two years later he returned to Dunedin, where he works today as Science Manager at ADInstruments—a world-leading provider of data acquisition and analysis systems.

In the long-term, Matthew hopes to help Otago develop its own Science, Technology, Engineering, and Math (STEM) informal learning centre. Perhaps unsurprisingly, given his exciting career path, Matthew says "I believe there is real value in engaging the community in science, particularly young people, and those without a background in science."