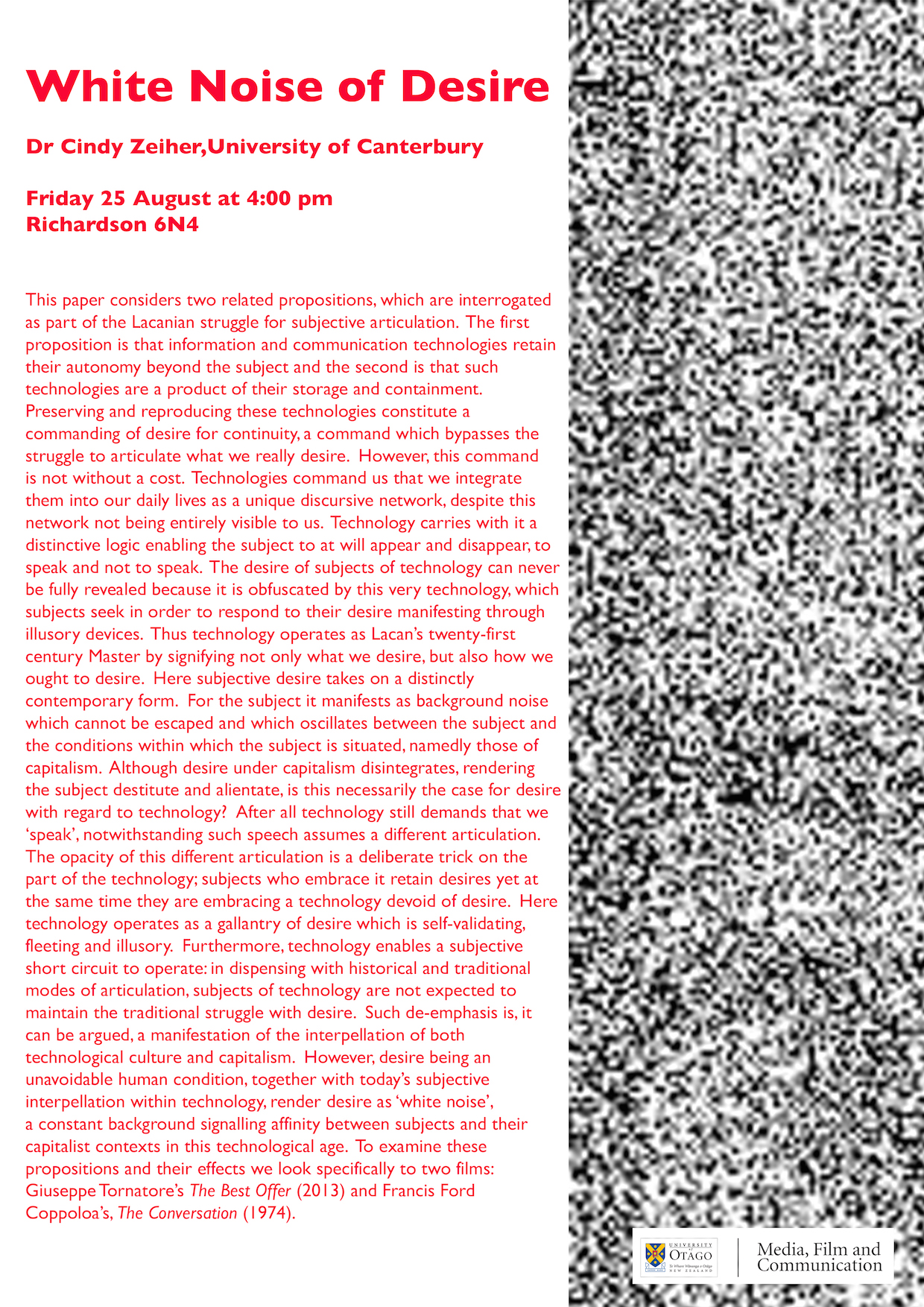 This paper considers two related propositions, which are interrogated as part of the Lacanian struggle for subjective articulation. The first proposition is that information and communication technologies retain their autonomy beyond the subject and the second is that such technologies are a product of their storage and containment. Preserving and reproducing these technologies constitute a commanding of desire for continuity, a command which bypasses the struggle to articulate what we really desire. However, this command is not without a cost. Technologies command us that we integrate them into our daily lives as a unique discursive network, despite this network not being entirely visible to us. Technology carries with it a distinctive logic enabling the subject to at will appear and disappear, to speak and not to speak. The desire of subjects of technology can never be fully revealed because it is obfuscated by this very technology, which subjects seek in order to respond to their desire manifesting through illusory devices. Thus technology operates as Lacan’s twenty-first century Master by signifying not only what we desire, but also how we ought to desire. Here subjective desire takes on a distinctly contemporary form. For the subject it manifests as background noise which cannot be escaped and which oscillates between the subject and the conditions within which the subject is situated, namely those of capitalism. Although desire under capitalism disintegrates, rendering the subject destitute and alienated, is this necessarily the case for desire with regard to technology? After all technology still demands that we ‘speak’, notwithstanding such speech assumes a different articulation. The opacity of this different articulation is a deliberate trick on the part of technology; subjects who embrace it retain desires yet at the same time they are embracing a technology devoid of desire. Here technology operates as a gallantry of desire which is self-validating, fleeting and illusory. Furthermore, technology enables a subjective short circuit to operate: in dispensing with historical and traditional modes of articulation, subjects of technology are not expected to maintain the traditional struggle with desire. Such de-emphasis is, it can be argued, a manifestation of the interpellation of both technological culture and capitalism. However, desire being an unavoidable human condition, together with today’s subjective interpellation within technology, render desire as ‘white noise’, a constant background signalling affinity between subjects and their capitalist contexts in this technological age. To examine these propositions and their effects we look specifically to two films: Giuseppe Tornatore’s The Best Offer (2013) and Frances Ford Coppoloa’s, The Conversation (1974).

Cindy Zeiher is a faculty member in the School of Languages, Political and Social Sciences at the University of Canterbury, Christchurch, New Zealand. Her writings are in the areas of social and political theories as well as Lacanian psychoanalysis. She is co-editor (along with Mike Grimshaw) for CT&T: Continental Thought & Theory. She is currently co-editing a collection with Todd McGowan, Can Philosophy Love? Reflections and Encounters (Rowman and Littlefield, November 2017), and co-authoring, On Silence: Holding the Voice Hostage with Ed Pluth (Palgrave Lacan Series, forthcoming 2018). She has also contributed to such journals as Counterfutures: Left Thought and Praxis Aotearoa, TOPIA: Canadian Journal for Cultural Studies and Filozofski Vestnik.