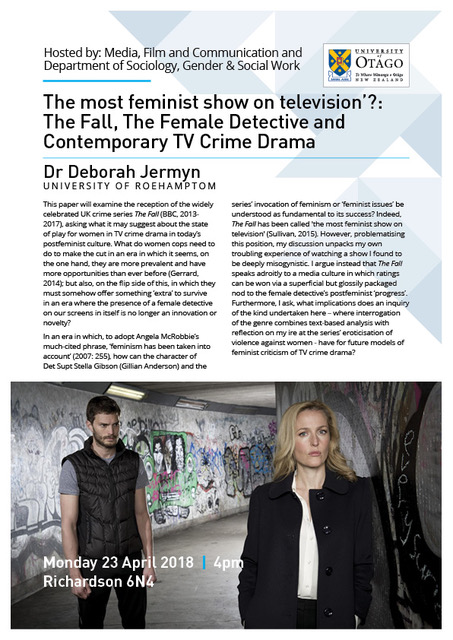 This paper will examine the reception of the widely celebrated UK crime series The Fall (BBC, 2013- 2017), asking what it may suggest about the state of play for women in TV crime drama in today’s
postfeminist culture. What do women cops need to do to make the cut in an era in which it seems, on the one hand, they are more prevalent and have more opportunities than ever before (Gerrard, 2014); but also, on the flip side of this, in which they must somehow offer something ‘extra’ to survive in an era where the presence of a female detective on our screens in itself is no longer an innovation or novelty?

In an era in which, to adopt Angela McRobbie’s much-cited phrase, ‘feminism has been taken into account’ (2007: 255), how can the character of Det Supt Stella Gibson (Gillian Anderson) and the series’ invocation of feminism or ‘feminist issues’ be understood as fundamental to its success? Indeed, The Fall has been called 'the most feminist show on television' (Sullivan, 2015). However, problematising this position, my discussion unpacks my own troubling experience of watching a show I found to be deeply misogynistic. I argue instead that The Fall speaks adroitly to a media culture in which ratings can be won via a superficial but glossily packaged nod to the female detective’s postfeminist ‘progress’. Furthermore, I ask, what implications does an inquiry of the kind undertaken here – where interrogation of the genre combines text-based analysis with reflection on my ire at the series’ eroticisation of violence against women - have for future models of feminist criticism of TV crime drama?