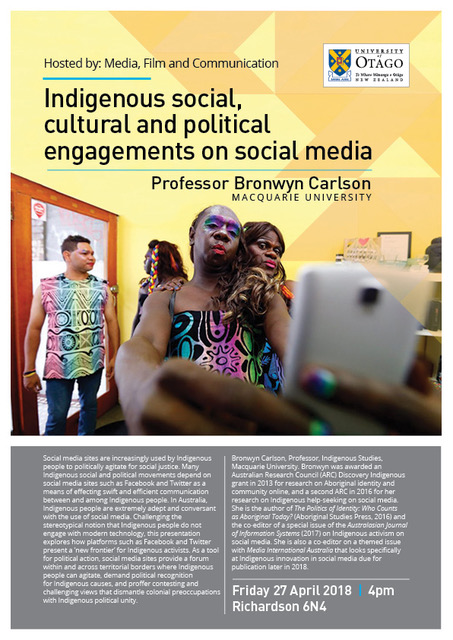 In Australia, Indigenous people are extremely adept and conversant with the use of social media. Challenging the stereotypical notion that Indigenous people do not engage with modern technology, this presentation explores how platforms such as Facebook and Twitter present a ‘new frontier’ for Indigenous activists.

As a tool for political action, social media sites provide a forum within and across territorial borders where Indigenous people can agitate, demand political recognition for Indigenous causes, and proffer contesting and challenging views that dismantle colonial preoccupations with Indigenous political unity.

Bronwyn Carlson, Professor, Indigenous Studies, Macquarie University. Bronwyn was awarded an Australian Research Council (ARC) Discovery Indigenous grant in 2013 for research on Aboriginal identity and community online, and a second ARC in 2016 for her research on Indigenous help-seeking on social media. She is the author of The Politics of Identity: Who Counts as Aboriginal Today? (Aboriginal Studies Press, 2016) and the co-editor of a special issue of the Australasian Journal of Information Systems (2017) on Indigenous activism on social media. She is also a co-editor on a themed issue with Media International Australia that looks specifically at Indigenous innovation in social media due for publication later in 2018.