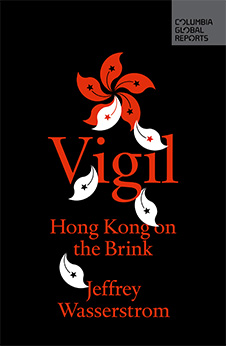 This illustrated talk will focus on patterns of protest and the tightening of political controls in Hong Kong. It will pay close attention to the 2014 Umbrella Movement but focus even more on the dramatic events of 2019, including the candlelight vigil held on the 30th anniversary of the June 4th Massacre that the speaker attended.

Wasserstrom has been visiting Hong Kong regularly since 1987 and was last there in mid-December of last year, a visit that allowed him to watch the last march of 2019 involving a crowd of more than 100,000 people.

He will draw on his work as a specialist in the history of anti-authoritarian movements in various parts of the world, his work on global cities of Asia, and his work on twentieth-century Chinese students movements. His talk will introduce ideas he explores in his book Vigil: Hong Kong on the Brink (publishing February 11, 2020), while also bringing in things that have occurred since it was finished.

Jeffrey Wasserstrom is the Chancellor’s Professor of History, University of California Irvine. A former director of the East Asian Studies Center at Indiana University and a past editor of the Journal of Asian Studies, his most recent book, aside from Vigil, is the co-authored third edition of China in the 21st Century: What Everyone Needs to Know (Oxford 2018). In addition to writing for scholarly periodicals, he is a regular contributor to newspapers (including the New York Times) and magazines (such as TIME). He has spoken at literary festivals, consulted on documentary films about the Tiananmen protests and the Umbrella Movement.