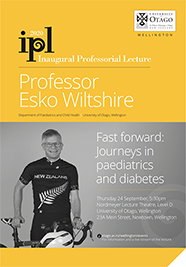 Please join us for this Inaugural Professorial Lecture by Professor Esko Wiltshire, Department of Paediatrics and Diabetes, University of Otago, Wellington

Professor Esko Wiltshire is a General Paediatrician and Paediatric Endocrinologist and in his clinical role helps manage children with a wide range of conditions, particularly diabetes and growth problems. Esko’s research has particularly focussed on the complications of diabetes in children, both acute and chronic, including treatment for hypoglycaemia and more recently research involving emerging diabetes technology. As type 1 diabetes becomes significantly more common and as we approach the centenary of the discovery of insulin, these issues and advances are becoming even more important, particularly how they will be utilised in an equitable manner.

We would love you to join us in person for this celebratory event, but for those unable to be there, it will be livestreamed.