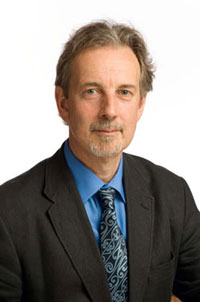 A leading UK academic has been appointed as the University of Otago's inaugural Director of its new Legal Issues Centre and Professor in the Faculty of Law. The focus of the Centre, which is the first of its kind in New Zealand, is on how to reorient the legal system so that it works better for ordinary people.

Professor Kim Economides will take up the professorial appointment and Centre directorship next month. He comes to Otago from the University of Exeter where he is Professor of Legal Ethics and a former Head of its School of Law. He is founding General Editor of the international journal Legal Ethics and has held several advisory positions to the UK Parliament on legal reform issues.

His previous academic positions include Acting Director of the Centre for Legal Practice (2005-2006) prior to the Centre's transfer to the University of Plymouth. Professor Economides also co-directed the Access to Justice in Rural Britain Project from 1983-1987.

From 1993-95, he was seconded as Education Secretary to the UK Lord Chancellor's Advisory Committee on Legal Education & Conduct, and was appointed in 2006 as Specialist Adviser to the Parliamentary Joint Committee on the Draft Legal Services Bill.

Three decades ago, Professor Economides was a researcher on the Florence Access to Justice Project based at the European University Institute in Italy.

"In many ways, my new position with the Legal Issues Centre represents a return to this first research focus of mine," he says.

The Centre's purpose is to carry out socio-legal and policy-oriented research relating to how a more accessible, affordable and efficient legal system can be created for the benefit of all citizens, and how courts can best ascertain the truth and arrive at a fair and just outcome.

The professorial chair and Centre were established through the University's Leading Thinkers initiative, following a $1m donation by Christchurch philanthropists Grant and Marilyn Nelson, as trustees of the Gama Foundation. The donation was matched under the Government's Partnerships for Excellence scheme, lifting the total to $2m. The Gama Foundation recently enhanced its support of the Centre through an additional generous endowment.

Professor Economides says that while the Centre has a wide brief to research many aspects of the legal system, it is likely to focus initially on civil legal processes and how these can be made cheaper and more accessible for ordinary citizens.

"We shall be investigating some of the main barriers to the legal system, such as expense, delay as well as psychological and geographic factors that may prevent or inhibit access."

To this end, the Centre has already launched a nationwide survey to try to build up a picture, for the first time, of New Zealanders' perceptions and use of the legal system.

"Not only will we have a strong focus on diagnosing where problems may lie and developing proposals for reform, but we shall also consider the processes through which recommendations and policies can be successfully translated into actual changes that benefit people."

Professor Economides says a major attraction of coming to Otago to take up the position is the unique opportunities that New Zealand affords.

"I've always seen this country as a 'legal laboratory' where one can develop new ideas and implement change that can improve people's everyday lives – a good example being the introduction of the Accident Compensation scheme (ACC)."

The ultimate aim of the Centre's work will be to make the legal system fairer and more accessible without compromising standards, he says.

"Professor Economides has vast experience both as a leading researcher and a person who has worked closely with the legal profession in the United Kingdom. He will bring a wealth of knowledge and new ideas to the problems our legal system is facing," Professor Henaghan says.

Vice-Chancellor Professor David Skegg says he is delighted that the University has appointed Professor Economides.

"His excellent record as a legal scholar and his high-level contributions as an expert advisor on legal reforms make him an ideal person to lead the important work of the Centre."

Professor Economides will take up his position at the University next month.