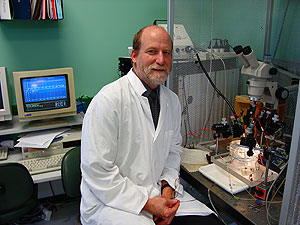 The University of Otago will award its highest distinction, the Distinguished Research Medal, to Professor Wickliffe Abraham for his internationally influential work in advancing knowledge of how the brain stores memories.

Since joining the University's Department of Psychology in 1981, Professor Abraham has made outstanding contributions to the understanding of neural mechanisms underlying memory storage in healthy and diseased brains.

Professor Abraham's research into the cellular and molecular bases of learning and memory has led to numerous influential scientific articles, including in leading international journals such as Nature.

“It is a wonderful honour to be awarded this medal,” says Professor Abraham.

“It is a very special prize, and it is hugely gratifying to be recognised by my peers here at Otago. I am fortunate to be working in a university where there is a strong commitment to research excellence.”

He believes the excellent quality of his colleagues and students has also made an immense contribution to the development of his research career.

“This award recognises his outstanding contribution to neuroscience and the potential of his work to advance our understanding of brain disease,” says Professor Skegg.

Professor Abraham's prolific work has provided important insights into the processes of “long-term potentiation” and “long-term depression” in the synaptic connections between nerve cells. These processes involve changes in the connections' strength - a phenomenon known as synaptic plasticity - which are believed to underpin learning and memory.

In the 1990s, Professor Abraham discovered and named the associated concept of “metaplasticity”, which has helped revolutionise thinking in the international neuroscience community about how synaptic plasticity processes may operate.

He was also among the first researchers in the world to apply molecular biology methods to studying synaptic plasticity. This interdisciplinary approach includes a long-standing and fruitful collaboration with the Department of Biochemistry's Professor Warren Tate.

His current work with Professor Tate and Dr Joanna Williams of the Department of Anatomy and Structural Biology focuses on a little-understood protein called secreted amyloid precursor protein-alpha, whose production is limited in the brain cells of Alzheimer's sufferers.

Originally from the United States, Professor Abraham gained a PhD in Neuroscience from the University of Florida in 1981. In the same year he first joined Otago's Department of Psychology as a postdoctoral fellow.

In his time at Otago, he and his collaborators have attracted more than $16.6m in external funding to support his research, including major grants from New Zealand's Marsden Fund and Health Research Council. In 1997, he was made a Fellow of the Royal Society of New Zealand, and in 2007, the Society awarded Professor Abraham a prestigious James Cook Research Fellowship to further his research.

Internationally, he has attracted funding from the Human Frontiers in Science Program and the US National Institutes of Health, and has taken part in numerous research collaborations with neuroscientists in Australia, USA, Asia and Europe.

Professor Abraham is the founding Director of the University's Brain Health and Repair Research Centre, which brings together researchers across several disciplines to study the relation between brain function and neurological disorders.

His other contributions to Neuroscience research at Otago include decades of sharing his considerable knowledge and skills with colleagues and with dozens of postgraduate students and postdoctoral researchers. He has also played an important role in the wider promotion of the discipline as a driving force behind the annual Australasian Winter Conference on Brain Research.

The medal will be awarded at a public lecture by Professor Abraham later in the year.