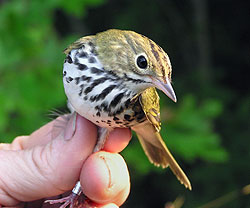 Ecologists have at last worked out a way of using recordings of birdsong to accurately measure the size of bird populations.

This is the first time sound recordings from a microphone array have been translated into accurate estimates of bird species' populations. Because the new technique, reported in the British Ecological Society's Journal of Applied Ecology, will also work with whale song, it could lead to a major advance in the ability to monitor whale and dolphin numbers.

Developed by Deanna Dawson of the US Geological Survey and Dr Murray Efford of the University of Otago's Zoology Department, the technique is an innovative combination of sound recording with spatially explicit capture-recapture (SECR), a new version of one of ecologists' oldest tools for monitoring animal populations.

Birds communicate by singing or calling, and biologists have long counted these cues to get an index of bird abundance. But it is much harder to work out the actual density of a bird population because existing methods need observers to measure either the distance to each bird, or whether they are within a set distance from the observer. This is straightforward if birds are seen, but difficult when birds are heard but not seen.

Dr Efford says a way has been found to estimate population density of birds or other animals that vocalise by combining sound information from several microphones. A sound spreading through a forest or other habitat leaves a 'footprint'. The size of the footprint depends on how quickly the sound attenuates. Mathematically, there is a unique combination of population density and attenuation rate that best matches the number and 'size' of the recorded sounds. Computer methods were used to find the best match, and thereby estimate density.

The researchers developed the method by recording the ovenbird – a warbler more often heard than seen – in deciduous forest at the Patuxent Research Refuge near Laurel, Maryland, USA. They rigged up four microphones close to the ground in a square with 21 metre-long sides. Over five days, they moved the microphones to 75 different points across their study area and recorded ovenbirds singing.

They chose the ovenbird as the species from which to develop the method because of its concise, distinctive song and because the males sing from the lower layers of the forest.

The new acoustic technique gives a more accurate estimate of bird numbers than using nets to capture birds, which can be stressful for the birds as well as time consuming for the researchers.

As well as helping assess populations of cryptic bird species such as the ovenbird, the new technique might be applied to measuring hard-to-reach populations of marine mammals, such as whales and dolphins. Developing ways of estimating whale and dolphin numbers acoustically is seen as critical for understanding these species' populations.

Recording the sounds has other benefits, too. "Sound intensity and other characteristics can be measured from the spectrogram - the graph of the sounds - to improve density estimates. Archiving the sounds also makes it possible to re-examine them, or to extract additional information as analytical methods evolve," says Dawson.

Copies of the paper, photographs and audio clips of ovenbird song are available from:

The ovenbird (Seiurus aurocapilla) is a small ground-nesting insect-eating bird. Around five inches long with a thin, pointed beak, white eye ring and pink legs, the plumage on its upperparts is olive with white underparts streaked with black. The ovenbird breeds in northeastern and north central regions of North America, and winters in southern Florida, the West Indies, Mexico, and Central America. It gets its name from the shape of its domed nest, which looks like a Dutch oven.

'Capture-recapture' methods are commonly used in ecology to estimate population size and survival rates. Marked animals are released, and some are later recaptured, along with other unmarked animals. Spatially explicit capture–recapture (SECR) methods also include in the calculations data on where animals are caught and recaptured. The resulting estimates of density allow for the movement of each animal about its home range. In applying SECR to sounds, Dawson and Efford mathematically treat a sound footprint like the home range of an animal. However, instead of using detections of an animal across both space and time, they use the nearly simultaneous detection of a sound at two or more microphones. The strength of the sound recorded by a microphone, which depends on the distance the microphone is from the sound source, provides additional information to improve estimates of density.

Journal of Applied Ecology is published by Wiley-Blackwell for the British Ecological Society.

Contents lists are available at: