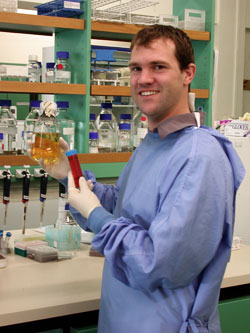 An early-career neuroscientist returning to the University of Otago from the USA has gained a prestigious fellowship to pursue promising new therapies for improving the brain’s recovery from strokes.

Dr Andrew Clarkson will be supported by a four-year Sir Charles Hercus Health Research Fellowship from the Health Research Council. The Fellowship, which supports the development of emerging New Zealand scientists, is valued at $500,000.

Dr Clarkson, who returns to Otago from a position at the UCLA Department of Neurology, will investigate how to most effectively manipulate learning and memory pathways in the brain to promote post-stroke recovery.

“Stroke is the leading cause of adult disability, with typically limited recovery from its cognitive and behavioural effects. This fellowship will allow me to concentrate on a research programme pursuing new therapies to help restore brain function,” Dr Clarkson says.

His research builds on recent findings showing that, to a small extent, the brain tries to repair itself after a stroke. This is partly done by a remapping of brain functions to undamaged parts of the brain, and forming new connections in the brain tissue next to the area damaged by the stroke.

“My work will focus on how to most effectively bring the dormant, partially-damaged brain cells around stroke-affected areas back ‘online’ to take over the functions of the destroyed areas,” Dr Clarkson says.

Dr Clarkson’s undergraduate, postgraduate and initial postdoctoral studies were at the University of Otago. He then took up a position at the UCLA School of Medicine, which is one of the top US medical schools.

Earlier this year, he gained a repatriation fellowship from the Neurological Foundation, which paved the way for him to come back for the Charles Hercus Fellowship. He will be based in the Department of Psychology.

“I’m excited to be back at Otago with internationally leading brain researchers such as Professor Cliff Abraham of the Department of Psychology and Dr John Reynolds of Anatomy and Structural Biology as mentors.”