Research finds no advantage in learning to read from age five 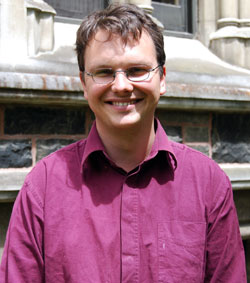 A University of Otago researcher has uncovered for the first time quantitative evidence that teaching children to read from age five is not likely to make that child any more successful at reading than a child who learns reading later, from age seven.

The ground-breaking Psychology PhD research, conducted by Dr Sebastian Suggate, has been placed on the University’s “distinguished list” of doctoral theses for 2009. Dr Suggate has also been awarded a prestigious Postdoctoral Research Fellowship from the Humboldt Association in Germany to the University of Wurzburg in Bavaria to further his studies into childhood education.

Starting in 2007, Dr Suggate conducted one international and two New Zealand studies, each one backing up the conclusions of the other; that there is no difference between the reading ability of early (from age five) and late (from age seven) readers by the time those children reach their last year at Primary School by age 11.

Therefore, the previously unscientifically tested and widely held view that children in New Zealand should learn to read from age five, now appears contestable; Dr Suggate, in three years of studies, involving regular surveys of around 400 New Zealand children, found no statistical evidence of an advantage in reading from the earlier age of five.

He decided to study childhood reading because he could not find any quantitative controlled study within the English-speaking world to ascertain whether later starting readers were at an advantage or disadvantage. He found only one methodologically weak study conducted in 1974, but nothing since that time. Yet people regularly insist that early reading is integral to a child’s later achievement and success. He admits to being surprised, therefore, by his own findings that this is not the case.

“One theory for the finding that an earlier beginning does not lead to a later advantage is that the most important early factors for later reading achievement, for most children, are language and learning experiences that are gained without formal reading instruction,” says Dr Suggate.

“Because later starters at reading are still learning through play, language, and interactions with adults, their long-term learning is not disadvantaged. Instead, these activities prepare the soil well for later development of reading.”

“This research then raises the question; if there aren’t advantages to learning to read from the age of five, could there be disadvantages to starting teaching children to read earlier (at age 5). In other words, we could be putting them off,” he says.

Dr Suggate conducted three studies over three years to obtain his data. First, he re-analysed data collected as part of the 2006 Programme for International Student Assessment (known as the PISA Study) across 54 countries and found that by the age of 15, there was no advantage in learning to read early from age 5. This first study has recently been published in the International Journal of Educational Research.

He then conducted two studies based on research in New Zealand only. The first compared the reading ability of 54 children who had attended Rudolf Steiner Schools (who begin learning reading from age 7) with another 50 children who had attended primary schools. Children were tested at the age of 12, at state-run intermediate schools in Dunedin, Christchurch and Hastings.

The study controlled for their home literacy environments, the economic situation of their parents, parental education, school decile rating, their vocabulary development (called receptive vocabulary), ethnicity and sex. Their reading fluency and comprehension were then measured and he found there was “no difference” by age 12 in the reading ability between the early and later starters.

Dr Suggate’s third and final study was a longitudinal one to look at reading from day one to the end of primary school, and to see whether differences in school experiences and the primary curriculum at the two different types of schools would have accounted for the ability of Rudolf Steiner children to reach the same reading level as their state counterparts by age 12.

As well as controlling for the same variables such as economic situation of families, education of parents, sex, ethnicity and home literacy environments, this study also looked at second language ability, and found out how the teachers taught reading in their classes using questionnaires. This also looked at the amount of time teachers spend on oral language activities versus reading activities to help rule out, or control for, any differences in teaching methods that might account for the results.

“At the end of the study, the data was analysed using Hierarchical Linear Modelling, which is commonly used in longitudinal studies, and a particularly robust way to analyse data, and estimated the point at which the early starters and later starters of learning to read met – and it came up with 10.89 years – between 10 and 11 years of age,” he says.

“It was very exciting and unexpected – one of those science moments. The results concurred with the results of the other two studies and there were no differences in the abilities of the early and later readers by 11.”

“Many families have children who do not achieve well in reading at the beginning of school, so this will be quite comforting to them,” says Dr Suggate.

The last two studies are currently in preparation for submission to publications, although he understands his findings are controversial as this study is the first of its kind to look quantitatively and statistically at this area of childhood learning.

“In fact, language development is, in many cases, a better predictor of later reading, than early reading is. Secondly, this research should prompt educationalists, teachers and parents to reconsider what is important for children at age six or seven to learn, and third, it may give heart to parents whose children have initial difficulty learning to read. The picture is more complicated than simply early mastery of reading skills.”

Dr Suggate graduated with his PhD at the Dunedin Town Hall yesterday (Saturday 19 December). He leaves with his family for Germany on 27 December.