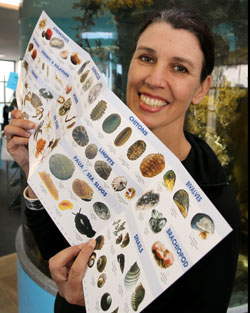 Students of all ages finally have the first comprehensive photographic guide to the animals and plants found on New Zealand’s rocky shore thanks to the work of the University of Otago’s New Zealand Marine Studies Centre.

With the support of Mobil Oil New Zealand Limited, two separate Northern and Southern versions of the Rocky Shore Guide will be launched on Sunday, March 7, at the beginning of New Zealand Seaweek.

Thousands of copies of the Guide have been distributed to all primary and secondary schools in New Zealand over the past few weeks. Each guide contains high-quality colour plant and animal images - the work of Dunedin photographer Tom Bird.

New Zealand Marine Studies Centre Programme Director Sally Carson says teachers of schools visiting the Centre at Portobello on the Otago Peninsula have long expressed a demand for a photographic guide to show their students of all ages, from early childhood through to the tertiary sector, how to identify the animals and many different types of seaweed they find on the rocky shores of New Zealand.

But the Centre did not have a quality photographic resource to give teachers and students who were enthusiastic about the marine environment.

“These plants and animals are found on New Zealand’s doorstep - they are our closest marine neighbours. Most schools will do a rocky shore study at some stage. Our role is to increase New Zealanders’ knowledge of the marine environment and the first stage of environmental awareness is developing a connection with the environment and sparking an interest that will make people care,” Ms Carson says.

Also, The Marine Studies Centre felt it was timely to produce a guide which highlights the diversity of animals and plants on the nation’s backdoor step during what is International Year of Biodiversity.

“The seaweeds on our rocky shore are beautiful, diverse and colourful and yet most people know very little about them. People are often amazed when they go down and take a look,” says Ms Carson.

She hopes more guides can be produced that can be used to identify animals and plants on the sandy and muddy shores, which have different plants and animals living on them.

The launch of the Rocky Shore Guide takes place at The New Zealand Marine Studies Centre in Hatchery Road, Portobello, at 3pm down on the shore, weather permitting. Free copies of the guide will be available to all Aquarium visitors and those attending the launch.

Well-known North Island marine biologist and professional photographer Roger Grace will cut a special cake at the launch on Sunday. He has been an active campaigner for marine conservation, both in New Zealand and internationally. He has also played a role in many of New Zealand's marine reserve campaigns and is a frequent contributor of articles on marine conservation to marine magazines.

The guide will also be available for children to identify plants and animals they find while participating in the Great Dunedin Coastal Cleanup on Sunday 14 March and at other Seaweek events around the country.