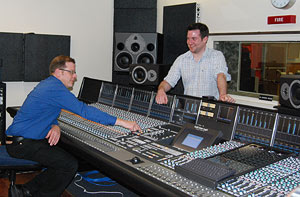 The installation of a world-class music console in the University of Otago’s Albany Street studio has set the stage for Dunedin to strengthen its place as a formidable force in music production, says the Head of Otago’s Department of Music Professor Henry Johnson.

The equipping of the studio with the new technology will also lead to greater creativity and opportunities for innovation for postgraduate students of music within the University’s Music Department, Professor Johnson says.

The purpose-built former Radio New Zealand recording studio is already outstanding in terms of size and capability to record large groups of musicians.

The new console – the only one of its type in New Zealand – significantly increases the studio’s capability and appeal as a major recording studio for albums and for many types of live performances.

“We’re introducing 21st century technology to a vintage 1960s’ studio that was built originally to record an orchestra. We’re bringing the studio into the current day but maintaining its integrity,” says Professor Johnson.

The console, or mixing desk, is now operational after being shipped from London and assembled in the building.

It was purchased after the Music Department successfully applied for a special equipment grant from the University.

Professor Johnson says this particular model, purchased from Solid State Logic (SSL), co-owned by British rock legend Peter Gabriel, was chosen because it utilises state-of-the-art technology. One of the largest of its kind in New Zealand, it can record from nearly 100 “inputs” or microphones in a band or orchestra at one time. Capable of linkages to high-speed broadband networks, it has also been bought with “technological opportunities” in mind.

The Music Department plans to collaborate with experts in computing science and link the machine to the high-speed fibre-optic KAREN (Kiwi Advanced Research and Education Network), which allows universities throughout New Zealand to share information.

Professor Johnson says this will enable ‘real-time’ collaborations of different groups of musicians between Dunedin and a film or music studio in any other major city in New Zealand and beyond. This could involve any type of performance, from classical to rock.

“The desk could then record over large distances, for example stream a live show or several live shows at once through a radio channel, whether they are happening at Albany Street, at the new Forsyth Barr Stadium at University Plaza, or anywhere else in New Zealand with a fibre-optic link.”

The BBC and CBS’s David Letterman Show use the same technology, where it is used to allow a multitude of bands and dialogue to be recorded and broadcast simultaneously.

Currently, four staff in the Music Department have the technical ability to operate the desk, which will be used for staff and postgraduate research in performance, and in particular for the new Doctorate of Musical Arts (DMA) in Studio Production, introduced to the curriculum for the first time this year. It will also be helpful for undergraduate recording purposes.

“This will be a drawcard for any student pursuing music as a career because we can now give them real industry recording experience while they study their music degrees,” Professor Johnson says. “This really raises the bar in terms of what’s available in New Zealand.”

Members of the Music Department have also established the New Zealand Music Industry Centre (to be known as NZMiC) in collaboration with local music company DunedinMusic.Com Ltd. The aim of NZMiC is to act as a mechanism through which the Music Department can engage with the music industry, and foster research outputs and the recording of albums.

“Its role is to promote research and collaborate with industry to explore further research, creative and commercial opportunities. We want to promote Dunedin as an industry hub with the University and local music industry driving it,” Professor Johnson says.

This would involve making the studio available for bands or music groups who wish to record there, collaborating with performers and recording artists, and seeking to develop a research-based context for university-industry projects and partnerships.

Music Department Studio Technician Stephen Stedman says the equipping of the Albany Street studio to record to an exceptionally high standard was appropriate given Dunedin’s history as a home for creativity in music.

“This creates an uncompromised recording space - a benchmark recording facility. For me this has been a once-in-a-lifetime opportunity to be involved with the installation of a desk like this,” he says.

The NZMiC will be officially launched at a function involving representatives from the music industry on May 5 at 11am at Albany Street Studio.