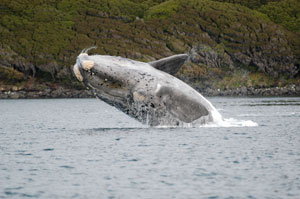 Photograph courtesy of Dr Will Rayment.

An eleven-person team of Otago University, Department of Conservation, Otago Museum and Massey University scientists and staff will leave on Monday for the sub-Antarctic Auckland Islands – 460km South of New Zealand – aboard the University’s Marine Science research vessel, Polaris II. They will be based at Port Ross on the Islands for three weeks, and plan to return on August 18.

The group will also study for the first time the winter diet of the critically endangered New Zealand sea lion on the Islands, which is home to the largest breeding colonies of the mammals.

Expedition leader and Department of Marine Science Research Fellow Dr Will Rayment says for the first time acoustic recordings will be taken of the sounds made by southern right whales. Researchers will also study and photograph the whales’ population and habitat.

In recent years, growing numbers of southern right whales have been noticed in and around the pristine waters of the Auckland Islands. Researchers now want to ascertain the factors which make the habitat so favourable for the whales, and also which environmental factors could potentially hinder their recovery.

Before whaling began in the early nineteenth century, southern right whales were abundant in harbours and coastal New Zealand waters. But because they preferred inshore areas and were slow swimming and easy to kill, coastal whaling groups found them profitable to hunt. 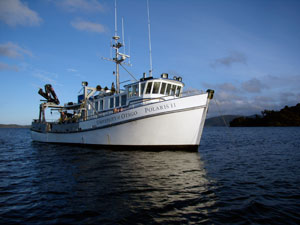 They were quickly hunted to near extinction, and it took until the 1960s for these now fully-protected whales to begin a tentative recovery. However, they are still a rare sight off New Zealand’s coast, but attract significant public interest whenever they do appear, Dr Rayment says.

“Our overall goal is to once again see large numbers of these whales around our coast as there used to be,” he says.

“We will use data on whale distribution at the Auckland Islands to predict areas of mainland New Zealand that are likely to be re-colonised by these whales in the future. This will enable us to identify the areas where distribution of whales might overlap with potentially harmful human activities and to proactively prevent conservation issues before they occur.”

Dr Rayment says this is likely to mean future liaison with fishing, tourism and shipping authorities.

Dr Chris Lalas of Otago’s Marine Science Department is leading the research project on sea lions, which are classified as “nationally critical” within the New Zealand Threat Classification System.

This project will involve the examination of undigested prey remains to reveal the hitherto unknown winter diet of sea lions; also the team will gather samples from dead sea birds and marine mammals to research hydrocarbon levels in New Zealand coastal and marine wildlife.

The scientific team is therefore encouraging members of the public to contact the Department of Conservation using “0800 DOCHOT” when they see whales so the whales can be photographed – ultimately with the aim of checking whether any from the Auckland Islands are showing up around New Zealand’s coast.

The Otago Museum's Research and Interpretation Coordinator Lucy Rowe, who has a background in marine mammal research, says the Museum is excited about the opportunity to participate in the research expedition. She will be helping out the whale research team and gathering material to go towards displays.

“It is important for the Museum to communicate the importance of conserving the ecosystems of the sub-Antarctic Islands to the Otago community,” she says.

Two more expeditions to the Auckland Islands are planned for the winters of 2011 and 2012.