An evening stroll along one of Dunedin’s most popular beaches has led University of Otago researchers in New Zealand to a fascinating and unique scientific discovery.

Many of New Zealand’s beach-goers will be familiar with the large and distinctive bull-kelp that frequently washes up on shores. But they may not suspect the critical role the kelp plays in biodiversity and the distribution of many marine plants and animals.

A Marsden-funded study at the University of Otago, led by Associate Professor Jon Waters of the Department of Zoology, used genetic evidence to ascertain for the first time where bull-kelp plants washed up at St Clair Beach, Dunedin, had come from. 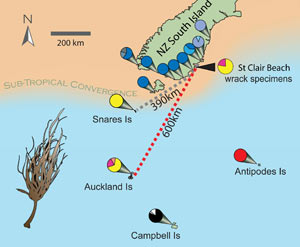 The researchers found that several of the kelp specimens had travelled from the subantarctic, some from as far away as the Auckland Islands, 600 km south of New Zealand. These ocean voyages are estimated to have taken several weeks, and in some cases over two months.

Postdoctoral researcher Ceridwen Fraser, who co-authored the study, says the kelp’s strong buoyancy and toughness made it able to withstand long periods adrift in the ocean.

“We see a lot of bull kelp drifting out at sea, and scientists have always suspected that it could travel a long way, perhaps even crossing entire oceans. Now we know that it really can.” Dr Fraser says.

Associate Professor Waters says a wide variety of rocky-shore animal species were shown to raft with the kelp by clinging on or by living deep within burrows and crevices in the kelp’s base.

Coastal species that live on small, isolated islands do not have many options when it comes to inter-continental travel.

“We suspect that this type of rafting is an important means for many rocky shore species to distribute themselves across oceans, and around the isolated coasts of the Southern Hemisphere,” he says.

Although many researchers had previously suggested long-distance rafting might be possible, “this is the first study to show that such a wide a variety of different species can actually raft across oceans and arrive at distant shores.”

In coastal Otago, large amounts of drifting seaweed are regularly washed ashore during easterly weather systems. Bull-kelp plants that have been drifting in the open ocean for a long time often have large, stalked goose barnacles growing on them. The size of the goose barnacles can be used to estimate how long the kelp has been at sea.

The Otago study was published this week in the respected British journal “Proceedings of the Royal Society B”.

*Both Jonathan and Crid are in Australia (Tasmania) at present and can be contacted on the following numbers. They have said they will be near the landline number in particular between 10am and 11am NZ time if you wish to interview them.