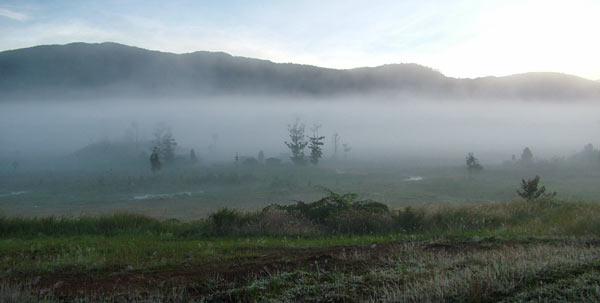 A University of Otago-led archaeological investigation of campsites up to 50,000 years old in a remote highland valley of Papua New Guinea is revealing how highly adaptable the humans at the forefront of global colonisation were.

Otago anthropologist Professor Glenn Summerhayes and colleagues have just published findings in the leading journal Science indicating that, as early as 49,000 years ago, groups were regularly moving back and forth through extremely rugged territory to exploit rich plant food resources in Papua New Guinea’s Ivane Valley, which is 2000 metres above sea level.

The archaeological work reveals campsites buried by volcanic ash where people made stone tools, hunted small animals and gathered the high energy nuts of the local Pandanus trees in conditions much colder than the present day. The sites were occupied during a relatively warm phase of the last ice age – the Pleistocene – when New Guinea was joined to Australia as part of the continent of Sahul. 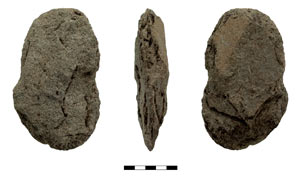 Professor Summerhayes, who led the team of archaeologists from Otago, Australia and Papua New Guinea, says the stone tools they found, known as waisted axes, suggest colonists were deliberately modifying the valley landscape, mostly likely to clear forest patches to promote the growth of useful plants such as Pandanus.

“Our findings paint a picture of a highly mobile society that quickly adapted to and survived in a radically different environment to the coastal regions they had recently arrived from. It is remarkable that this is occurring around 15,000 years before other modern humans would colonise Europe,” Professor Summerhayes says.

As well as using tools to engage in agro-forestry, state-of-the-art analysis of starch residues on the waisted axes suggest that yams were being brought to the valley as food supplies from the lower altitudes where they grew, he says.

“All this is unprecedented evidence of careful, intentional colonisation over thousands of years, rather than people just wandering around foraging and moving on. These are unique footprints of humanity that challenge some current notions regarding at what stage humans can be truly said to have become ‘modern’ in their thinking and behaviour.”

The novel idea that Pleistocene peoples in Sahul were practising agro-forestry by opening up patches to promote growth of desired plants was first proposed two decades ago, on little if any evidence, by an ex-Otago staff archaeologist, Les Groube, based on his work at PNG’s coastal Huon Peninsula, he says.

“Our new evidence from the Ivane valley, including the presence of tools fit for this purpose, gels perfectly with his model,” Professor Summerhayes says.

Further residue and micro-wear analysis of the tools is currently being undertaken by Otago PhD Student Anne Ford in an attempt to gain solid evidence of the purposes to which they were put.

The current research was supported by the Marsden Fund of New Zealand.