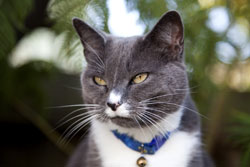 If domestic cats wore bell collars in urban areas the numbers of native birds caught and killed could be reduced by as much as half, a new University of Otago study shows.

Dr Yolanda van Heezik and Dr Christoph Matthaei from the Department of Zoology - with Zoology Honours student Jo Gordon - studied cats known by their owners to be prolific hunters.

“This study shows it is worthwhile for domestic cats to wear bells and would go some way towards reducing the huge numbers of native birds cats catch. It won’t eliminate the problem completely, but it’s a start.”

Previous studies have shown that domestic cats kill tens of thousands of native birds each year in New Zealand.
“People might consider cats as a nuisance because they dig in their gardens, or they may be concerned about cats roaming for welfare issues, but people hardly ever think about the impacts cats are having on our native birds.

“Most cats don’t catch a lot of prey and they may bring back perhaps only one bellbird a year. But if you consider the large number of domestic cats in towns and cities, then the cumulative impact is likely to be huge,” she says.

In New Zealand urban environments, there are on average 220 domestic cats per square kilometre, and each cat has an average travelling range of about 2.2ha.

In total during the six-week study, the cats not wearing the collar caught 378 animals, including 82 birds. When the cats wore bells, they caught only 41 birds by comparison.

This study has been published in the Australian journal Wildlife Research.