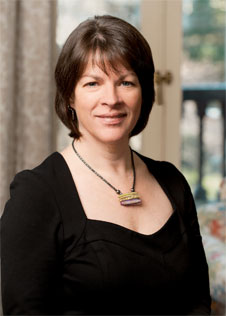 University of Otago Vice-Chancellor Professor Harlene Hayne is delighted that Dunedin has won prestigious UNESCO City of Literature status, which will have far-reaching benefits for both town and gown.

Professor Hayne says the work is the culmination of a substantial body of work put in by the Dunedin City Council, and also University of Otago staff and students, and she congratulates the Mayor Dave Cull on the success of the bid.
“Coming hard on the heels of the Gigatown win, this is yet another outstanding achievement for this great city.

“UNESCO status is based not only on Dunedin and this University’s past as a haven for many of New Zealand’s most distinguished leading lights of literature, but also it is based on our unique and nurturing current environment that encompasses so many literature-related activities - our music, research publications, our libraries including the Hocken, theatres, science communication, Maori literature, our arts fellowships – all of which highlight our fantastic town and gown relationship.

“I’m confident that for both our University and the city, this is the beginning of even greater things,” says Professor Hayne.

Senior Lecturer in Design at the Department of Applied Sciences Noel Waite, who was on the steering committee for the bid, says Dunedin is now an international “portal for literature” and represents New Zealand on the world stage.

He is extremely proud of Design students Eleanor Parker and Michael Moeahu who, with their summer scholarships last year, researched the information that went into a 20,000-word document in support of Dunedin’s bid to become a City of Literature, in what was a highly competitive situation.

“The key job they did was aggregate the information about what is literature and where is it in Dunedin, because it wasn’t in a single place. The literature bid was based on our music including the Dunedin Sound and Thomas Bracken’s national anthem, our poetry, drama, science communication, Maori literature – even things like our PBRF data, with some 6000 publications published by University researchers in 2012 alone, all our libraries, especially the Hocken for the University, and the medical, science and Knox College libraries also. We also included the Centre for the Book, as well as Otakou Press...“We included every bit of writing done here, anything related to literature. In bringing it together for the UNESCO bid, we did not assume UNESCO’s people knew anything at all about our city or country. And we had to write evocatively, because we were competing against top nations, and more well- resourced ones.”

“The Robert Burns Fellowship was integral to our background on which we based the bid. Almost every one of the major New Zealand writers of the 20th century and to the present day has spent a year here at least.”

He believes the benefits for Dunedin will be far-reaching. The University can use the status to attract and retain more national and international students, establishing connections and collaborations with the other 11 UNESCO creative cities of literature, including the first City of Literature and Dunedin’s sister city Edinburgh, as well as the 59 other member cities of the network across Design, Cinema, Music, Media Arts, Gastronomy and Craft & Folk Arts throughout the world. From a business perspective, it will attract and catalyse more entrepreneurship in creative industries, and greatly enhance opportunities for literary and creative tourism experiences.

“We can rightly brand ourselves as an intelligent city, and generate community wellbeing at all levels with a focus on reading and writing, particularly for children. They have been a big focus for us. This has been a perfect partnership between town and gown,” he says.

Noel says he was “quietly confident” that Dunedin would succeed in its bid.

“We did the research and whether or not we’d get UNESCO status, we already had the evidence that we are a city of literature. We also did a comparative analysis with Christchurch, Wellington or Auckland, which didn’t make a bid.”
Centre for the Book celebrates Dr Donald Kerr, co-director of the University of Otago Centre for the Book, is also delighted at Dunedin’s success.

“In some senses it was a given that this great city – the only town and gown one in the country – was awarded the UNESCO City of Literature award,” says Dr Kerr, who is also the Central University Library’s Special Collections Librarian.

“The University pumps life into the city. The literary resources from the English Department (and Humanities in general), the Burns Fellowship, Otago University Press, the Hocken Collections and their regular exhibitions, the University Library and all its branches, Special Collections and their regular exhibitions, the Printer in Residence programme, the Centre for the Book at Otago, support from other departments like Applied Science, and the University’s strong association with other cultural institutions (local and national), have all contributed to a successful outcome managed and pushed through by the Dunedin City Council.”

The Literature bid was announced on the same day as early 19th century missionary records held at the University of Otago’s Hocken Library were named among New Zealand archival treasures this week listed on the UNESCO Memory of the World New Zealand register of documentary heritage. Last year, the Charles Brasch papers were listed on this register.