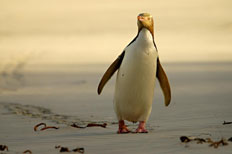 An international research team led by scientists from the University of Otago’s Department of Zoology has documented one of the most rapid biological transition events ever found.

“Previous research has shown that at the time of human arrival, New Zealand was inhabited by the waitaha penguin. Hunting and habitat change apparently caused the extinction of this unique mainland penguin, before the yellow-eyed penguin later arrived here from the subantarctic,” says Dr Nic Rawlence, who carried out the study.

“Until now, we really had no idea when one species went extinct and the other colonised,” Dr Rawlence says.

The new dating study has shown that waitaha penguin went extinct around the same time as the giant flightless moa, within 200 years of Polynesian settlement of New Zealand, before 1500 AD. Intriguingly, the yellowed eyed penguin then replaced the extinct penguin within just a few decades, in the early 1500s.

“This very rapid biological shift implies a substantial change in human pressure around this time. Interestingly, recent archaeological studies similarly suggest that the Maori population in southern New Zealand declined around 1500 AD, and coincided with a major dietary shift,” says Associate Professor Ian Smith, who was involved in the study.

This Marsden and Allan Wilson Centre funded research included team members from the Universities of Auckland, Otago, Adelaide and Oslo, as well as Canterbury Museum and the Museum of New Zealand Te Papa Tongarewa.

The team’s findings have been published this week in the leading international journal Quaternary Science Reviews.